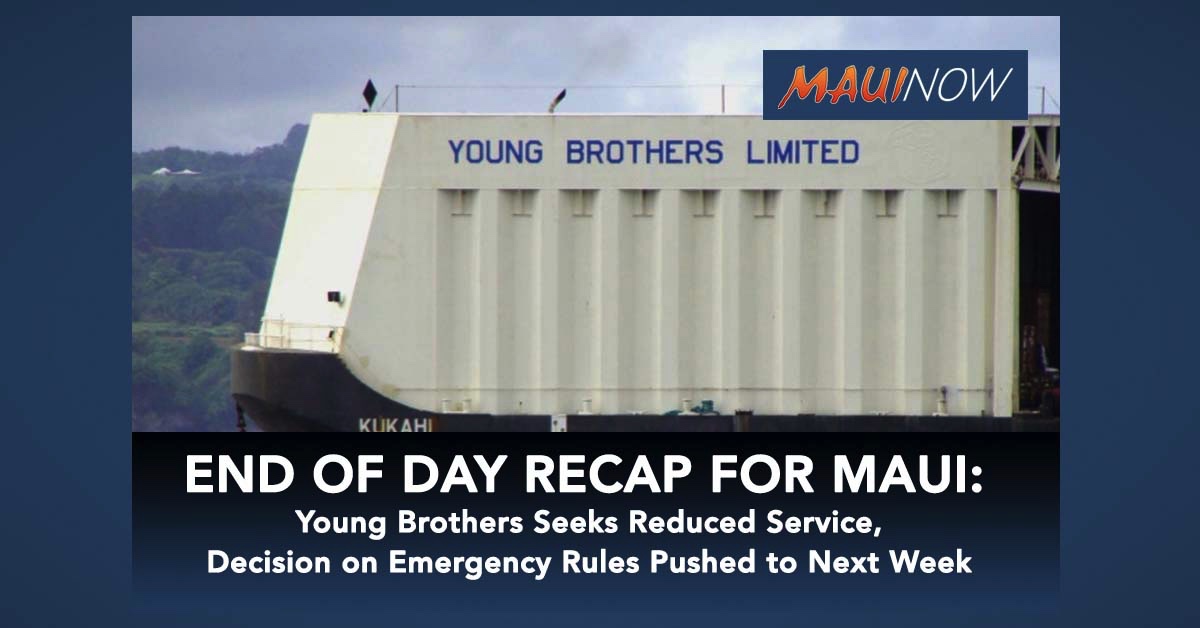 Young Brothers has reportedly announced a request to reduce stops in Maui County.  Managing Director Sandy Baz confirmed the news this afternoon during a press briefing saying the county has been in communication with the company.

“Most of our goods still do come from the mainland via Matson and other areas, so we do understand that they have financial constraints and challenges and look forward to working together with them to make sure that we do have continued service throughout our community.”

Baz called the service a critical lifeline for the local community especial those in rural areas.

Mayor Michael Victorino, who did not attend today’s press conference, provided a written statement regarding Young Brothers LLC’s submittal of a request to the Public Utilities Commission to make temporary adjustments to its sailing schedule for Maui and Hawaiʻi counties, effective May 5, 2020.

“My administration is aware of Young Brothers’ request to the PUC to reduce the number of its sailings from three to two for Kahului Harbor and from two to one for Molokaʻi,” Mayor Victorino said. “Our consumers can expect that store shelves will remain stocked with food and other supplies.

We expect the same amount of cargo will be shipped each week, although on fewer barge sailings to optimize excess capacity on barges bound for Maui, Molokaʻi and Lānaʻi, and Hilo. Young Brothers reports these are temporary changes tied to the reduction of shipping volume from the COVID-19 pandemic.

Young Brothers reported that it may supplement service to Molokaʻi as needed with an occasional stopover on Wednesday morning as the Kawaihae barge returns to Honolulu. This service is to help with the timely shipment of fresh produce from Molokaʻi to neighboring islands and support farming and agricultural industries.

I want to thank Young Brothers for being a good corporate partner for our community and continuing to provide steady, reliable, interisland cargo service.”

Decision on Extending Emergency Rules Pushed to Early Next Week

“The County of Maui continues to talk with the Governor’s Office and other mayors about extended emergency rules until the end of May,” said Baz.

According to Baz, the County is doing a risk assessment and paying close attention to daily numbers to make effective decisions.

“We are using guidance based on risk assessments for different types of businesses that may be able to be opened and we have learned from other jurisdictions across the world that opening up too soon can have fatal consequences,” said Baz who noted that more details will be announced soon.

“Typically we look at the period of time between the last increase in cases.  As case numbers decline, which we’ve had recently, then it looks closer to opening up.  We’re following best practices and looking at CDC guidelines and Johns Hopkins University is providing some guidance to us as well,” said Baz.

“Whether the hospital cases specifically–probably not because that was actually a while ago that the major cluster was presented.  As far as extension, we’re just looking at the benefit of our community and keeping our community safe,” said Baz.

Baz said a decision on the extension of Maui’s Stay at Home Order will most likely be made early next week.

Baz said the County of Maui is doing what it can to support the state with their issues regarding unemployment.

The Department of Labor and Industrial Relations said unemployment claims are being processed faster, thanks to more than 300 people that have been brought on to work on the backlog.

The public can check the status of their claims by visiting huiclaims2020.hawaii.gov/status.  Applicants are encouraged to make sure their applications are complete and accurate before submitting because if affects how quickly they receive payment.

“Even though it’s a state function, the county also has a website to assist residents with unemployment and find employment at the MauiAmericanJobCenter.com.

“We have heard that there are over 35,000 applications for unemployment and so cumulative over the period it’s a large number of our population.  I don’t have specifics as to how many are actually. receiving checks as of yet, but we are definitely working to support the state of Hawaiʻi,” said Baz.

The County’s Hawaiʻi Emergency Laulima Partnership or HELP program continues to provide assistance in partnership with Maui Economic Opportunity. Those seeking help can do so through an application on the MEO website.

The HELP program provides funding for basic needs such as housing, utilities, food, car, and anything needed to sustain activities and prevent homelessness.

Baz said that so far, the program has received applications for about three-quarters of its funding, and the county will be looking at additional funding as needed.

DLIR announced that between April 17 and 23 it distributed $68,097,470 in unemployment insurance benefits. $44,848,600 of that total includes the $600-a-week bonus made available by the Coronavirus Aid, Relief, and Economic Security (CARES) Act signed into law on March 27th.

DLIR Director Scott Murakami said, “The department was able to deliver a record level of benefits in a week and for that I am tremendously grateful for our workers. We know that there are still many in our community who are suffering and with the help of our sister departments, the Legislature, private sector partners and non-profits, we are resolute in providing a greater level of relief as soon as possible.”

No Trans-Pacific Flights to Maui for Second Day This Week

For a second day this week, Maui County had no trans-Pacific flights (domestic flights) from the mainland.  Mayor Victorino had earlier indicated that out-of-state flights would be reduced to four times per week.

A total of 54 people from the homeless community on Maui were tested for COVID-19 at the Family Life Center in Central Maui. There were also a dozen staff members from the facility that opted for testing as well. The testing was conducted by Premier Medical Group.

Family Life Center also provided lunch, a new backpack and hygiene supplies for those who were tested.  Staff continued discussion with each individual on getting permanent housing and access to emergency shelter.

700 Bags of Produce Distributed in Central Maui on Friday

An estimated 700 bags of food distributed in Central Maui for people in need at the War Memorial Gym Parking Lot.

Next Drive Through Testing is on Lānaʻi on Saturday, April 25

COVID-19 drive-through testing will be available to the residents of Lānaʻi from 8 a.m. to 11 a.m. Saturday, April 25, at the Old Dole Administration Building in Lānaʻi City.

Individuals ages 15 and older will qualify for testing.

Testing is also available Monday through Saturday at both the Straub clinic and the community health center.

An estimated 300 room nights have been utilized through the Hotel For Heroes program on Maui by Maui County medical professionals and first responders.

“This respite is a huge benefit for our doctors, nurses, police officers and others who are on the front lines of this pandemic,” said Baz.

The program is made possible through the Hawaiʻi Lodging and Tourism Association and local hotels that are providing rooms.

The County of Maui Department of Transportation issued 1,400 single-use masks and 3,000 gloves to Roberts Hawaiʻi for bus service.

The department also provided 600 masks and 2,000 gloves to Maui Economic Opportunity for its transportation services.  Additional masks for MEO operations on Molokaʻi, Lānaʻi and Hāna are being provided.