The two discussed the abbreviated session, which is designed to take care of vital legislation amid the ongoing COVID-19 pandemic.

On Wednesday, the Senate Ways and Means Committee approved a $5.1 billion Capital Improvement Project Budget for the 2020-2021 biennium.  Sen. English said these appropriations are particularly important because they put people back to work and pump money back into the economy so that funds begin to circulate again, providing some much needed recovery.

In addition to budget concerns, the group is also handling state Board and Commission confirmations.  On Tuesday, Sen. Baker said the group had reviewed more than 41 messages from the Governor including recommendations for four individuals from Maui County (three on Maui and one resident of Molokaʻi.

The Senate will vote today on the nomination of Maile Mathews-Perez to the State Council on Developmental Disabilities.  The Senate is also considering Sandra Diaz for the Mental Health and Substance Abuse Board; Dian Gruber to the Emergency Medical Service Advisory Committee; and Kathi Calles to the Hawai’i Advisory Commission on Drug Abuse and Controlled Substances.

Sen. Baker, who represents the area from Mākena in South Maui to Kāʻanapali in West Maui, noted that her district includes most of the resorts on island.  With tourism down, she said, that affects the taxes that come to the state and what can be spent toward programs and fixing roads.

Before reconvening on Monday, the Maui delegation met weekly to stay up on issues of concern to the people of Maui County.

Among the topics of discussion, Sen. Baker said, was graduation and the decision to keep the tradition of lighting the “L” at Puʻu Paʻupaʻu “Mount Ball” for Lahainaluna in place. A dedicated group of alumni will hike to the site and will light the “L” at 7:30 p.m. on Saturday, May 24.

Sen. Majority Leader English said that that although the session is abbreviated, several critical bills are being considered focusing on the budget, CIP appropriations, and CARES Act funding.  The neighbor islands will receive an estimated $188 million, including approximately $66 million for Maui in CARES Act funding that must be spent by the end of the year for COVID-19 response.

Sen. English said the state Senate allocates funding to the counties with “huge leeway” for Mayors, noting that guidelines and restrictions for the CARES Act funding come from the federal government.

The Salary Commission, which meets once every 10 years is reviewing legislative pay for the legislative, executive and judicial branches. Any pay cuts or waiver of pay raises if approved, would take effect after the election in November, according to Sen. English.

According to Sen. English, Senators are considering another session, possibly in June, before the next fiscal year to reassess some items which are scheduled to sunset unless reauthorized. “By then we should have little better grip on numbers and how we look at recovery and moving forward,” said Sen. English.

Some approaches to plugging the state shortfall this year include proceeding with unfilled jobs, cutting back programs, a decision not to do grant-in-aids this year and paying down unfunded liabilities.

On the topic of unemployment, Sen. Baker expressed gratitude to some 36 volunteers from the Senate who dedicated time to help with the state’s UI backlog.  The senators gave special thanks to Beverly Pauole-Moore who is retired now, but was employed when the system first started.  “She is a miracle worker,” said Sen. English, who thanked her for volunteering to help thousands of people on Maui  navigate through the system with expertise and advise.

While shipping routes have been reduced to rural communities like Molokaʻi, the senators said it has not meant less supplies for the island.  Young Brothers took into consideration the reduced amount of supplies that were intended for visitors and reworked their schedule to focus on residential needs. This has resulted in changes to the schedule, with adjustments made for Sunday hours.

Senators emphasized that any success we are seeing now “will backslide if people do not continue with social distancing and wearing masks, which has made a difference.” 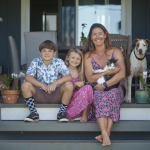 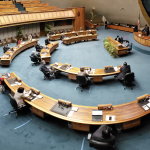