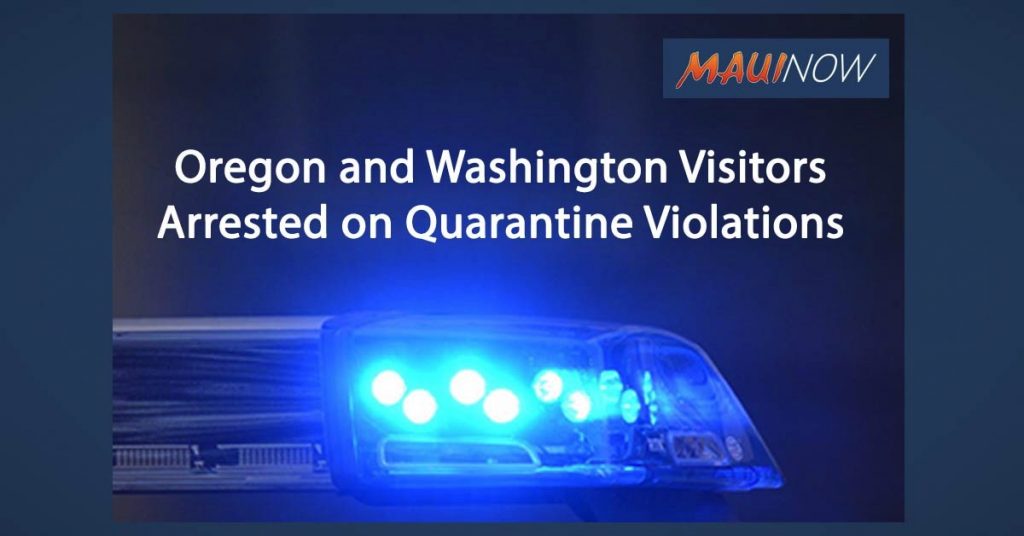 Two visitors accused of violating the state’s 14-day mandatory traveler quarantine rules in Waikīkī, were arrested on Friday afternoon.  They are the latest in a string of quarantine violators tracked by special agents in Hawai‘i.

Special Agents from the Investigation Division of the Department of the Attorney General arrested 20-year-old Artyon Zhiryada of Happy Valley, Oregon and 19-year-old Dan Vlasenko of Vancouver, Washington as they were leaving a condominium on Lewers Street in Waikīkī.

In addition to facing quarantine violation charges, state officials say Zhiryada faces an additional charge of cruelty to animals. Agents say he posted a video, among others, showing him shooting a feral chicken with a spear gun in an area parking lot.

They say the pair arrived in Honolulu last Saturday, indicating they were staying at a friend’s condo. According to state officials, “they immediately began breaking quarantine requirements and showed off their escapades by posting their adventures on social media sites as they traveled to various locations around Honolulu.”

Both men were booked and charged and have been unable to post bail at this time. For Zhiryada, bail is set at $4,500 and for Vlasenko it is $4,000.

Attorney General Clare Connors said, “We appreciate the assistance of those who reported these social media postings to us. Our special agents have arrested 15 quarantine violators in recent weeks and county police departments have arrested additional suspects. Once again, we must warn residents who return, and visitors who come to Hawai‘i, that they will face consequences for violating our COVID-19 emergency rules. Please do the right thing and if you cannot abide by the 14-day quarantine, postpone your trip to the Aloha State until the quarantine ends, for your own safety and the safety of everyone else.”

Thursday marked two months since the state’s mandatory 14-day self-quarantine started for all passengers arriving in Hawai‘i from out of state. The quarantine order was expanded on April 1st to include interisland travelers.

The 14-day travel quarantine for passengers arriving from out of state remains in effect until June 30.