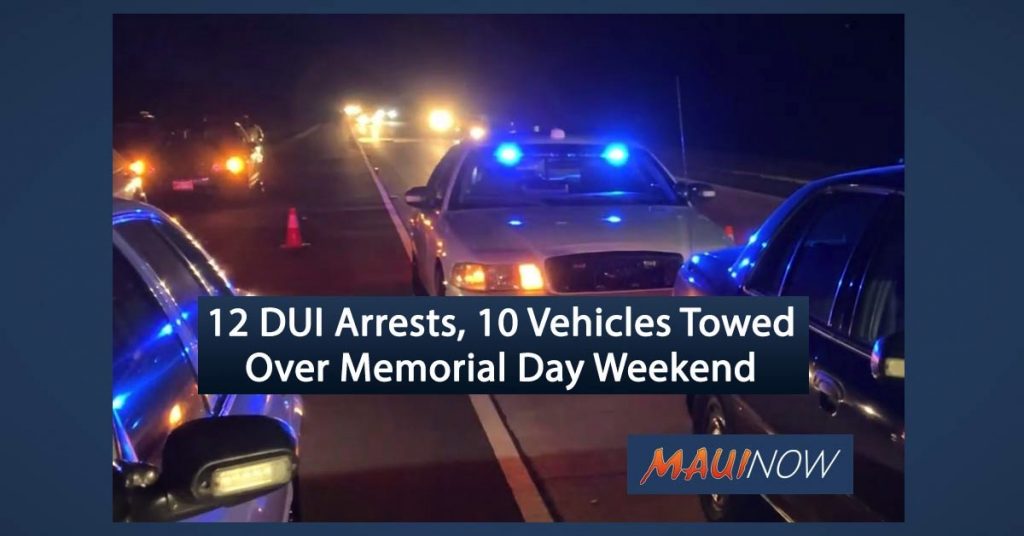 Maui police made 12 arrests for impaired driving and towed 10 vehicles during heightened enforcement over the Memorial Day weekend from Friday night, May 22 through Monday, May 25, 2020.

Under Bill 70, which gained unanimous passage in December 2019, police are authorized to tow vehicles at the driver’s or registered owner’s expense when they are arrested for a DUI.

Police had set up 11 separate sobriety checkpoints at various locations across the county.  In addition to the DUI arrests, police also responded to a near fatal accident on the Maui Veterans “Mokulele” Highway on Saturday night, and a fatal motorcycle accident yesterday afternoon on the Honoapiʻilani Highway.

“This holiday weekend MPD Traffic Division was much busier than we had hoped,” said Maui Police Lieutenant William Hankins, Traffic Division Commander.  Besides DUI enforcement, Lt. Hankins said, “Motorists really need to put the phones down, buckle up and follow all speed limits.”

“We are entering the summer months where historically fatal crashes increase.  To date we have five fatal crashes compared to 9 the same time last year.  If everyone driving follows the laws we have in place to keep everyone on the roads safe we can eliminate preventable crashes and fatalities,” he said.