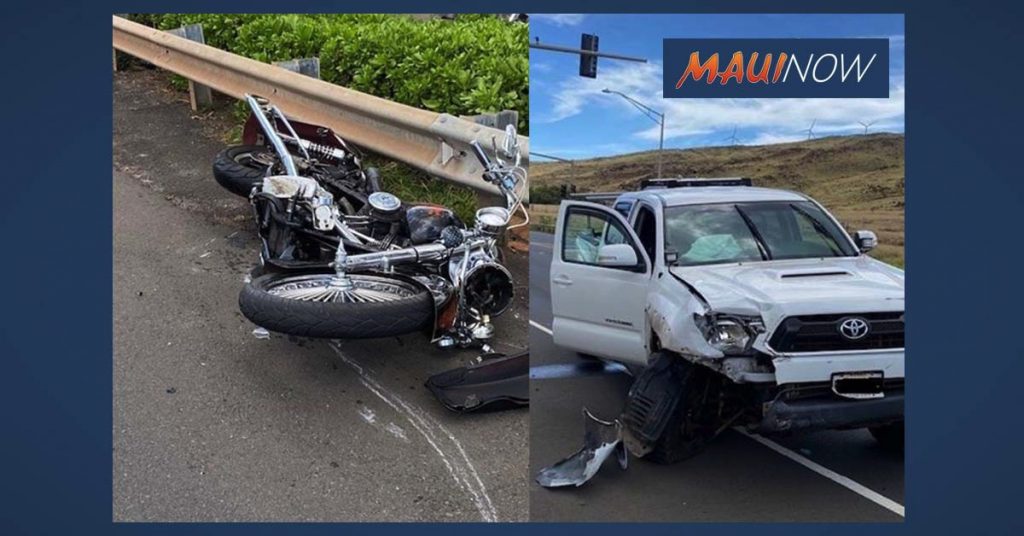 A 66-year-old motorcyclist from Kahana, Maui died as the result of a motor vehicle collision on the Honoapiʻilani Highway in Māʻalaea on Memorial Day.

Maui police have since identified the victim as Patrick Chin and say he died at the scene.

The incident was reported at 1:21 p.m. on Monday, May 25, 2020 on the Honoapiʻilani Highway at the Kapoli Street intersection.

A police investigation reveals that Chin was operating a 2006 Harley Davidson motorcycle and was traveling south bound on the Honoapiʻilani Highway when he attempted to execute a left turn from the highway onto Kapoli Street.

Police say their preliminary investigation reveals that the motorcyclist failed to yield the right of way to a 2013 Toyota Tacoma, traveling northbound (Wailuku direction) on Honoapiʻilani Highway. Subsequently, the motorcyclist was struck by the Toyota and was ejected onto the roadway.

The operator of the Toyota, a 25-year-old Wailuku man and his two passengers a 30-year-old man and a 32-year-old man from Wailuku were not injured in this crash.

Police say the involvement of speed, drugs and alcohol appear not to be factors; however the investigation is ongoing and final determination has yet to be made by traffic crash investigators.

To date Maui County has five fatalities this year, compared to nine at the same time last year.

This is following a fatal motor vehicle accident reported earlier this afternoon in the area.

Maui police are on scene investigating the crash, which involved a motorcyclist and another vehicle.

Honoapiʻilani Highway at Kapoli Street in Māʻalaea is closed due to a fatal traffic accident, according to Maui police.

Police say the accident involves a motorcycle and another vehicle. Traffic into Lahaina is being re-routed through the Maui Ocean Center. Police Officers are on scene.

Motorists are asked to avoid the area if possible.  Traffic is moving, but very slowly.