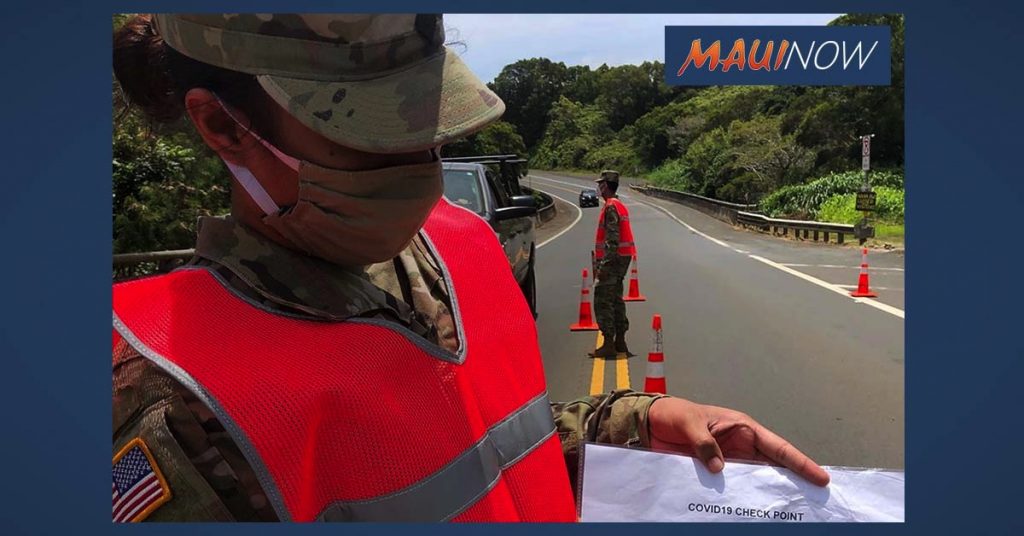 Traffic management plans into and out of East Maui were discussed during an evening Zoom meeting hosted by state Senator J. Kalani English on Tuesday night.

The temporary removal of previously established traffic checkpoints into and out of East Maui earlier this week, prompted lots of questions over whether National Guard presence would continue as a way to regulate traffic into and out of the rural community.

The checkpoints after Twin Falls on the Hāna Highway at at ʻUlupalakua Ranch on Piʻilani Highway, were established  to provide an added layer of protection to the isolated community amid the COVID-19 pandemic, by restricting traffic to area residents only.

Mayor Michael Victorino today said police and National Guard personnel will be reestablishing the checkpoints by Friday and will continue manning the sites through at least June 24, and possibly longer.  According to Mayor Victorino, the County is awaiting approvals from the President on a request for extension of National Guard staffing.

Gov. Ige explained that the absence of troops earlier this week was non-COVID related, and was due to precautions taken by Maui police to utilize personnel at other locations amid protests and demonstrations happening across the nation.  The demonstrations were sparked by the death of George Floyd during the man’s run in with a police officer in Minneapolis on May 25.

“I think all of us had anticipated that it would be peaceful protests, but certainly, I think everyone wanted to make certain that the police departments across the state were not overwhelmed like they have been in other communities.  I think that removing the police officers from Hāna community–from the East Maui community–was a precaution and we will be working with Maui County police to just determine how they want to proceed in the next day or so,” said Gov. Ige.

Maui Mayor Michael Victorino met with Maui Police Chief Tivoli Faaumu and Colonel Tyson Tahara with the Hawaiʻi National Guard today to discuss plans to reestablish the checkpoints for the remainder of the month.

“We understand the need is not as great as it was last month or the month before that; however, with that being said, we’ll work with the chief,” said Mayor Victorino.  “But one day soon, it has to come down and we have to have systems in place.  We cannot keep them… July will come very quickly.  And we do not have the manpower,” said Mayor Victorino, who noted that the Maui Police Department is shorthanded, and has been “for a long time.”

This also comes as the National Guard presence on Maui was recently cut in half, with the reduction in force dropping from 200 individuals to around 100 troops last week.  At the time, Mayor Victorino noted that troops would continue to man the checkpoint along the Hāna Highway, which was put in place to restrict traffic to residential motorists only in an effort to protect one of Maui’s rural communities from infection and avoid inundation of medical resources.

“I think we all can agree that we don’t want to return to what it was before COVID-19; and we would like to come up with a plan to figure out how to best manage the Hāna Highway–and then also the Piʻilani Highway on the back side,” said Sen. English.

He said the ideas for traffic management are “highly conceptual” at this time and the beginnings of a framework around ideas of how to proceed going forward.

“The idea is simple.  We can control traffic based on the fact that we have the sustainability of the road.  The road is a limiting factor.  We have put hundreds of millions (of dollars) into it over the years into keeping the road safe and open; but the carrying capacity of the road is limited.  So we can put in systems where we control the flow,” said Sen. English, noting you can legally manage traffic to address carrying capacity, so long as it does not impede the public’s ability to move on the road.

He said among the ideas that have surfaced is a reservation system.  “You’re given a time to come based on the algorithms of how people move in and out of the area,” he said.

According to Sen. English, those who have a reservation, can then plan activities like tours of historic churches, experience a Native Hawaiian cultural event, go to a loʻi, participate in a conservation program, or reserve a time to visit Waiʻānapanapa or Haleakalā National Park at Kīpahulu.

“It’s to manage the flow; but we cannot say that they cannot travel,” said Sen. English.

“You can make all your arrangements there.  All the eating places, so that we can now have a schedule and the bigger algorithms will help us to space people out from coming on the roads. So we would have the ability to say–you leave at this time, you leave at that time, or even suggest maybe tomorrow is a better date for you to go.  That’s the big overarching concept,” he said.

Another idea that has surfaced is the use of transponders in rental cars, which are traditionally used for toll roads on the mainland.  “Toll roads in Hawaiʻi are unconstitutional… but the technology, we can use.  So if they leave those on, we can measure when they pass certain points.  We would then be able to–in real time–track the movement of people.  And that would help us space people out and create a better experience,” said Sen. English.

He pointed toward the new management paradigm for Hā‘ena State Park on Kaua‘i as a sample of positive outcomes.  It was triggered by the floods and the need to manage use of the area.

“It took one event to trigger it coming into being… In Hā‘ena, they had a very similar situation.  Lots and lots of people, and lots of cars, overcrowded… They put in a program in which you make a reservation, you have a parking space, it’s timed out, and people have had a really great experience there.  That was the basis of what we started looking at,” said Sen. English.

Ari Wong, head ranger Haleakalā National Park explained how the reservation system for sunrise viewing was developed.  The system was implemented to deal with extremely high visitation, with as many as 300 to 400 vehicles parking in lava and blocking emergency vehicles.  Since then, a limit of 150 vehicles was implemented.

As part of the plan, some of the reservations are released 24 hours in advance so island residents could make last minute reservations.  (Cultural practitioners can always visit without a reservation).  “It allows them to have their own quiet space without the throngs of visitors prior to that,” said Wong.

Senator English noted that “There’s a couple of elements that we need to do as a community,” including, “Support maintaining our place. Support each other culturally. Let’s support each other economically; and support the place being the special place that it is.”

Neil Hasegawa, with the Hasegawa General Store said changes make sense, but questioned the ongoing closure of the highway. “Before COVID-19, the Maui economy was booming, but the road was becoming a burden to travel. There were lots of people getting upset because of the way tourist were parking,” he said.  “I like the look into the future because it can’t go back to that.  It makes a lot of sense to me. As a business owner, we need the tourism in Hāna, but its a matter of how we manage them–not them managing us.  That’s going to be key from here on out. Not reinventing the wheel, but draw experience from other communities and what they have done.”

Another idea that has surfaced is to set aside one weekend a month for local families to utilize Waiʻānapanapa State Park, which would give the community an opportunity to enjoy its own resources. “If we’re happy and satisfied and have some general agreements in place, tourists will be happy as well, all will have a better experience,” said Sen. English.

East Maui Councilmember Shane Sinenci suggested additional signage to facilitate better traffic management into and out of the area.  He also sought further information on a reservation system for the state and national park facilities in the area.

Kalani Kaʻanāʻanā with the Hawaiʻi Tourism Authority provided more information on the Hā‘ena system, which he said supports a “meaningful authentic visitor experience,” but “prioritizes access for residents first and foremost,” as well as attention to ʻāina.

He suggested the development of a framework that addresses a more holistic approach to managing tourism instead of “just dealing with the symptoms of it.”  “Most visitors are done with the mass tourism way of happening,” he said, noting that the state can help the community to take steps in mitigating current issues relating to illegal tour operators and discouraging the promotion of locations that are on state land.