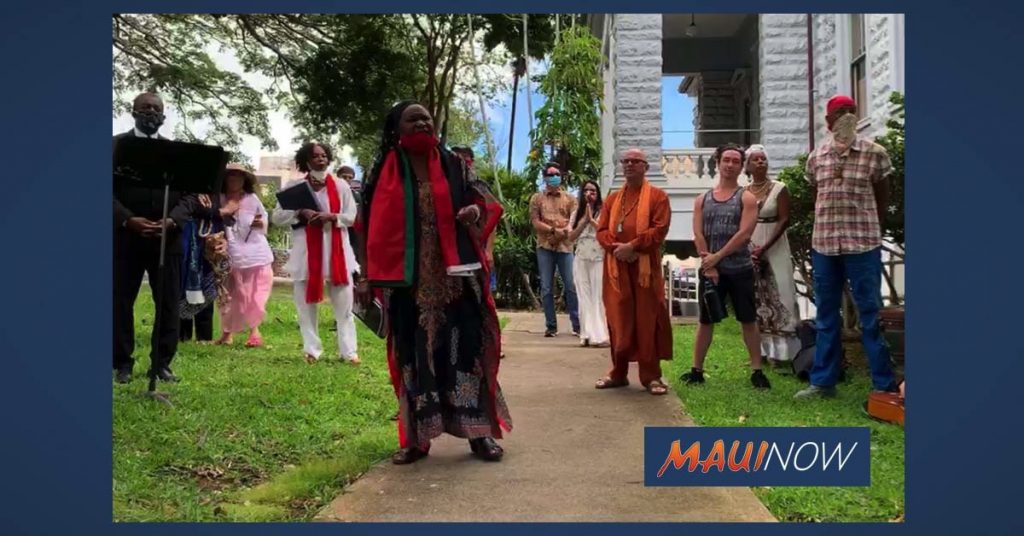 A vigil on Maui held in honor of the memory of George Floyd was held this morning in conjunction with the man’s memorial service, which was also held today on the mainland.

The remembrance comes amid tensions nationally over the man’s death during a run in with a police officer in Minneapolis on May 25.  It comes after days of demonstrations nationally prompted by video of the incident where an officer kneeled on Floyd’s neck for more than eight minutes amid pleas that he could not breathe.

Organizers of the “Come Let The Healing Begin” event, held at the Dr. Martin Luther King Jr. Stone of Hope Monument fronting the County Building in Wailuku said, “We come here today in a spirit of forgiveness, love and healing.”

During today’s event, African Americans on Maui President Gwyn Gorg said, “It’s okay to demonstrate. It’s not okay to loot and to make ourselves look a certain way so that the National Guard will be called out, so that everything is cancelled.  We must be smart. We must work together. We must love each other.  We must understand forgiveness.”

“It’s outrageous what happened.  We have a right to be angry, but also have to be smart.  We have to know how to take care of ourselves. We have to forgive.  We have to understand love no matter how hard it is… It’s very difficult when you know that people get killed innocently and there’s no recourse,” said Gorg who recited a poem during the event entitled “Where did you go?”

Two peaceful demonstrations were held on Maui over the weekend including a paddle out held in West Maui on Sunday, and a demonstration at the Hāna Highway, Haleakalā Highway intersection on Saturday.