State officials this afternoon released a statement saying “some social media sites have recently posted false information suggesting that out-of-state individuals are coming to Hawai‘i to cause trouble.”

Meantime, the Honolulu Police Department shared information on their official Facebook and Twitter feeds this afternoon saying the department has received “multiple inquiries about social media posts saying that mainland agitators are on Oʻahu to participate in local protests.”

According to the Police Department’s Tweet, “HPD is aware of the posts and will be taking appropriate actions where warranted.”

The HPD message went on to say that “There are also rumors about a medical facility being told to prepare for large numbers of injured protestors.  This rumor is false.”

Police go on to thank those who have exercised their right to free speech by participating in peaceful marches and rallies.  “Officers will continue to be present at all events to protect everyone’s safety and constitutional rights,” the HPD message said.

Attorney General Clare Connors, the state’s chief law enforcement official released a statement this afternoon saying, “While social media can be helpful in distributing information broadly, everyone knows there are countless examples of where social media platforms have spread misinformation through false postings. We encourage readers and viewers to be discerning, to rely only on official sources of information and to avoid getting caught up in the dissemination of rumors and/or gossip online.”

According to a press release issued by the state’s Joint Information Center, “Law enforcement agencies constantly monitor activities associated with groups and individuals planning to insert themselves inappropriately or illegally into activities in the state.”

The events come amid tensions nationally over George Floyd’s death during a run-in with a police officer in Minneapolis on May 25.  Demonstrations nationally were prompted by video of the incident where an officer kneeled on Floyd’s neck for more than eight minutes amid pleas that he could not breathe.

Demonstrations in the islands have been peaceful to date.  A “Come Let The Healing Begin” event, was held yesterday on Maui at the Dr. Martin Luther King Jr. Stone of Hope Monument fronting the County Building in Wailuku.  Other peaceful demonstrations were held on Maui last weekend including a paddle out held in West Maui on Sunday, and a demonstration at the Hāna Highway, Haleakalā Highway intersection on Saturday. 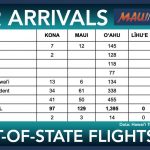 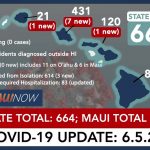