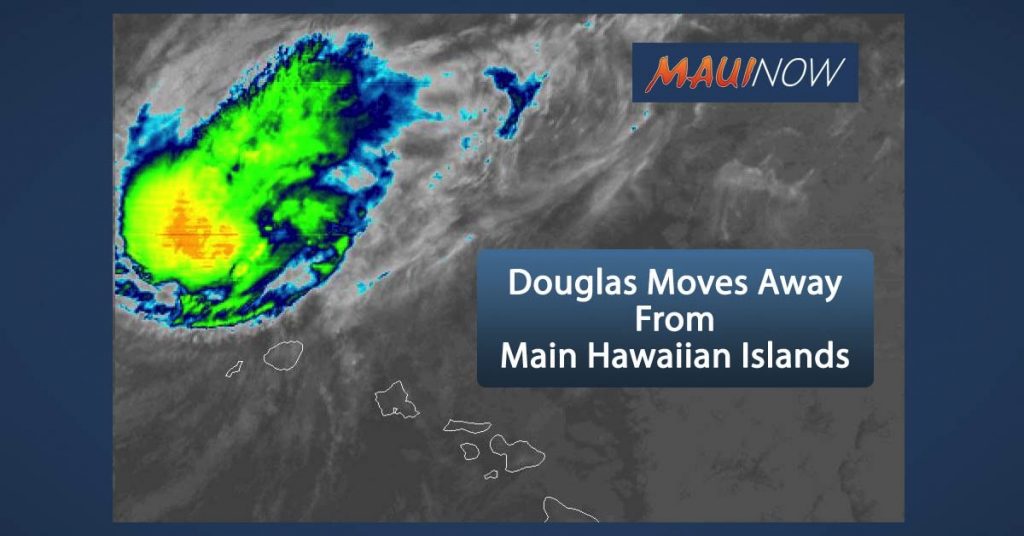 After skirting the island of Kauai overnight, Hurricane Douglas finally began moving on a path away from the Main Hawaiian Islands at around 2 o’clock this morning.  That’s when the Central Pacific Hurricane Center lifted the Hurricane warning for the island.  Now a warning is in place for portions of the Papahanaumokuakea Marine National Monument

Overnight there was a slight re-strengthening of the system with Douglas continuing on a parth WNW and slight increase in forward speed of 17 mph.  Sustained winds are 90 mph.

The Hurricane Warning that was in effect for Kauai County, has since been lifted (as of 2:25 a.m. on Monday, July 27, 2020) as Douglas moves rapidly away from Kauai.  The system is now 60 miles NNW of Lihue with 90 mph maximum sustained winds. It had picked up strength during a midnight advisory. The tropical cyclone continues on a path WNW at 16 mph.  Below are highlights from the latest update issued by the Central Pacific Hurricane Center: 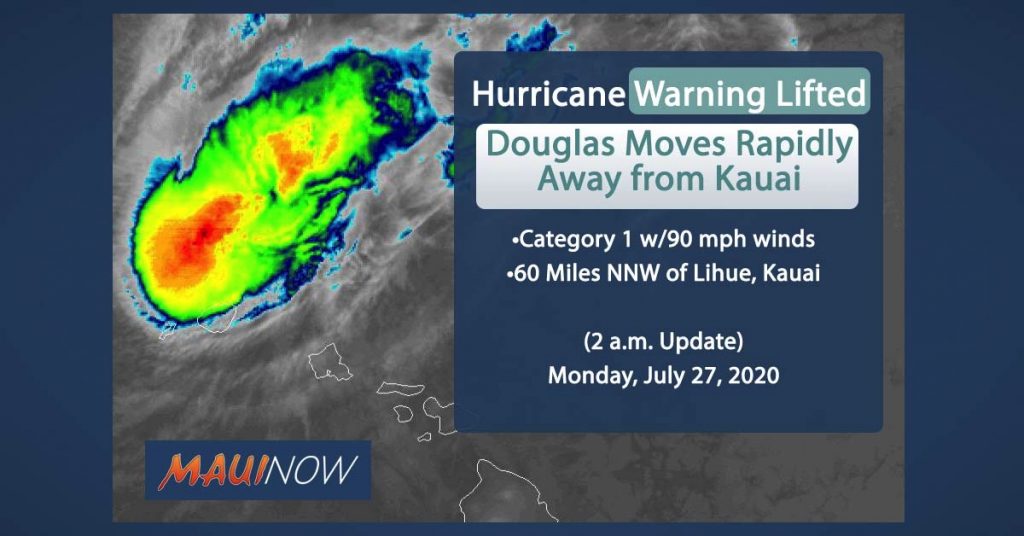 At 2 a.m. on Monday, July 27, the center of Hurricane Douglas was located by Hurricane Hunter aircraft near latitude 22.8 North, longitude 159.6 West. Douglas is moving toward the west-northwest near 16 mph. This general motion is expected to continue for the next couple of days, with a slight turn to the west and an increase in forward speed.

Maximum sustained winds are near 90 mph with higher gusts. Weakening is forecast during the next 48 hours, but Douglas will remain a hurricane until it passes west of Kauai.

RAINFALL: Rainfall associated with Douglas is expected to affect portions of the main Hawaiian Islands today. Total rain accumulations of 3 to 6 inches with locally higher amounts are possible, with the greatest rainfall in elevated terrain on Kauai. This rain may result in flash flooding and land slides, as well as rapid water level rises on small streams.

*Next complete advisory at 5 a.m.

Hurricane Douglas is a Little Stronger as it Pulls Away from Oahu, Skirts North of Kauai

A Hurricane Warning was cancelled shortly before midnight for Oahu, but remains in effect for Kauai as Douglas continues on a path WNW away from Oahu and is forecast to pass dangerously close to Kauai overnight.

At midnight, Douglas was located about 50 miles northeast of Lihue or about 100 miles northwest of Honolulu (22.5N 158.8W). Maximum sustained winds had increased to 90 mph with a movement WNW at 16 mph.

The Central Pacific Hurricane Center says that although the strongest winds will remain very close to the center of the system, damaging winds are still possible across Kauai.

Total rainfall accumulations of 3 to 6 inches are still a possibility across Kauai as the cyclone passes nearby, with the greatest flooding potential favoring windward and north facing slopes, forecasters said. Oahu could also get 1 to 2 inches of rain.

The CPHC has also identified potential impacts for areas where the cyclone has already passed including. Coastal impacts due to elevated surf along the exposed shores of the smaller islands is possible. “A combination of higher than predicted water levels, storm surge, and surf will lead to significant beach erosion, with water potentially washing onto vulnerable low-lying coastal roadways, especially at and around the daily high tides,” according to the midnight forecast.

“The worst impacts are now expected on Kauai, while conditions gradually improve from Maui westward to Oahu as the night progresses,” according to the CPHC.

Also during the latest update, the Tropical Storm Warning that was in effect for the Big Island of Hawaii has since been canceled.

WIND: Potential impacts from the main wind event are now unfolding across Kauai. Remain well sheltered until the threat for damaging winds passes. If realized, these impacts include:

SURGE: Potential impacts from the main surge event are now unfolding across Kauai. Remain well away from locally hazardous surge. If realized, these impacts include:

FLOODING RAIN: Potential impacts from the flooding rain are still unfolding across Kauai. Remain well guarded against dangerous flood waters. If realized, these impacts include:

TORNADOES: Little to no impacts are anticipated at this time across the Hawaiian islands.

WARNING PHASE – Listen to local official for recommended preparedness actions, including possible evacuation. If ordered to evacuate, do so immediately.

OTHER PREPAREDNESS INFORMATION: Now is the time to stay inside and away from windows. Listen for updates and be ready in case you lose electrical power. Keep a battery-powered radio, charged cell phone and flashlight handy.

*The next local statement will be issued by the National Weather Service in Honolulu HI around 6 a.m. on Monday, July 27, or sooner if conditions warrant.