A group of individuals protecting ancestral burials and asserting kuleana claims to lands in West Maui continue a demonstration to stop construction and trenching work on water lines near Hōkiokio Place in Lahaina.

Company representatives with West Maui Land say construction is for a new waterline providing non-potable irrigation water.  The water is sourced from existing wells to supplement the Launiupoko Irrigation Company system that supplies Ag water to the region.

Five Lahaina women were placed under citizen’s arrest on Tuesday and were charged with second degree criminal trespass after they climbed into the construction area trench, and police said they refused to leave.  They were released after posting $100 bail each.

The group claims the arrests on Tuesday were illegal since no citizen actually had effected an arrest on any other person present. They said, instead, the arresting officers appeared to have performed the arrests at the request of West Maui Land employees.

They returned to the site yesterday, but no arrests were made on day two, and the group reports that construction worked stopped early. After conducting preliminary investigations on Wednesday morning, the group says police determined the underlying dispute regarding land ownership was appropriate for civil court and not a criminal matter and left the area.

While the demonstrators claim kuleana rights to the land, West Maui Lan says the land is owned by Hope Builders and Waineʻe Land & Homes LLC and says the title to the land in question is “undisputed.”

On Day 3, the group reported the arrival of construction crews in the morning, but no work being conducted.

In addition to claims related to kuleana lands, the demonstrators say that West Maui Land and its subsidiaries have engaged in “unpermitted construction activities” in the area and have asked the mayor to step in.  Members say the company used a loophole in the County grading ordinance to conduct grading without archaeological study or permits.

Maui Now reached out to West Maui Land and received a response from the company this afternoon saying, “Independent archaeological monitors have been on site during work in the areas in question.  Additionally, our experts have researched previous archaeological studies of the area and are following all applicable state and county laws.”

West Maui Land contends that the pipeline corridor goes through former active sugar cane lands and was “designed to avoid all known cemeteries and burial sites.” According to a company statement, “The West Maui Construction crew is working with the extra scrutiny  of the archeologists to observe the existing laws that would be invoked should an unknown site be encountered.”

In response to the group’s call for intervention, officials with the Mayor’s office provided a statement to Maui Now on Wednesday evening saying, “Mayor Victorino is aware of the situation and investigating the issues involved in this matter. Meanwhile, he’s working toward achieving a resolution that respects and protects Native Hawaiian cultural and archaeological resources.”

Representatives with West Maui Land say they hope the matter can be resolved “quickly and amicably.”

According to West Maui Councilmember, Tamara Paltin, the Maui Lānaʻi Island Burial Council discussed the cold planing on Kauaʻula Road and the trenching for utility installation along Mill Street at Hōkiokio Place during a meeting on Oct. 2.

“At the meeting, the MLIBC recommended immediate cessation of all utility installation work in the area of the Pioneer Mill Cemetery, Jacobson Cemetery, and Puʻehuʻehuiki Cemetery. The Burial Council arrived at this recommendation based on the testimony and knowledge shared by lineal and cultural descendants as well as cultural maps, which indicated the presence of iwi kūpuna in the proposed route for the utility line,” said Paltin in a press release.

Paltin notes that the burial council also recommended that the State Historic Preservation Division review the project and conduct additional archaeological work to discern if a suitable alternative route exists and the location for such a route.

“The Island Burial Councils play a crucial role in the care of iwi kūpuna (ancestral remains) found in Native Hawaiian burial sites. Part of their kuleana includes making recommendations regarding appropriate management, treatment and protection of Native Hawaiian burial sites,” said Paltin who urged Mayor Victorino to issue a stop-work order until the recommendations could be implemented.

Members of the group say the general area consists of several cemeteries, recorded and unrecorded state historic and cultural sites and includes the old government road portion of Mill Street.

*Note: This story has been amended to reflect comments received from West Maui Land. 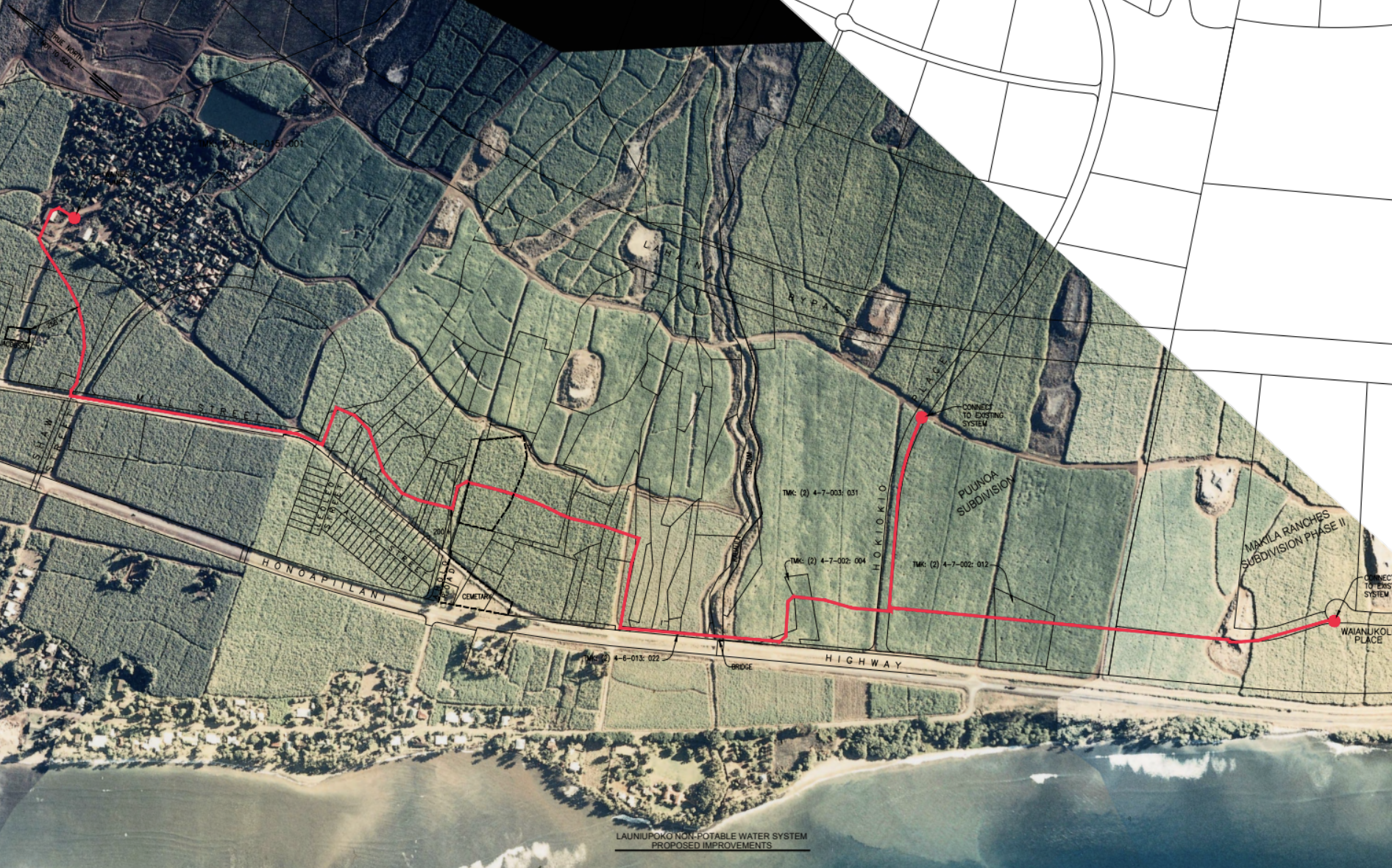 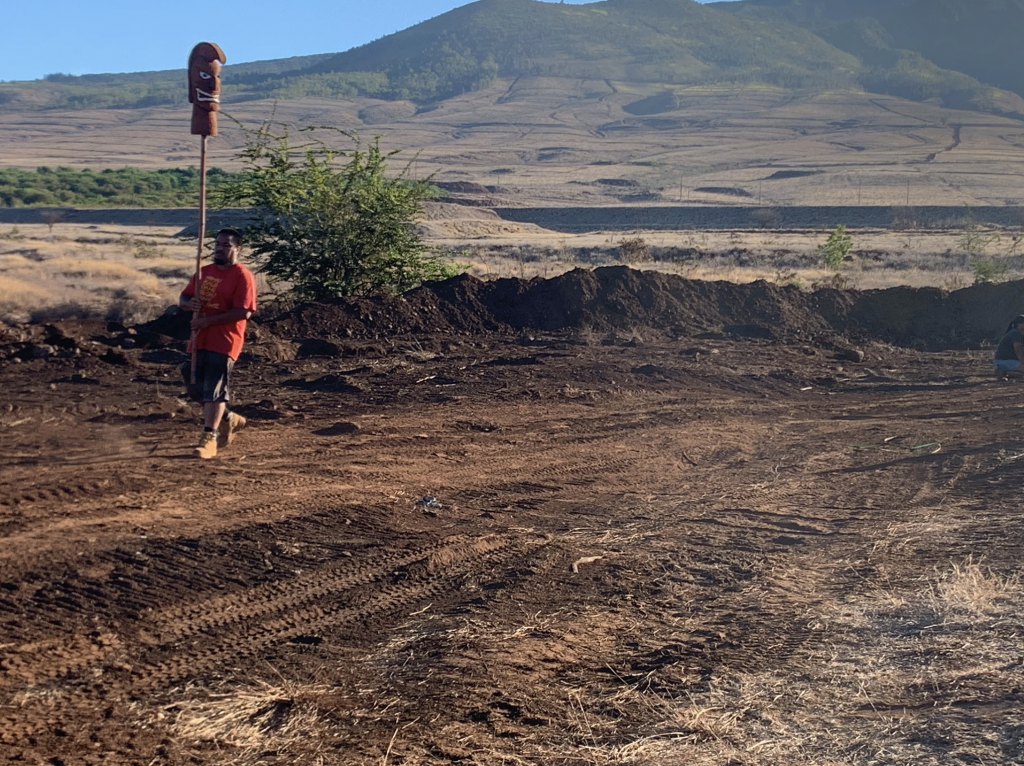 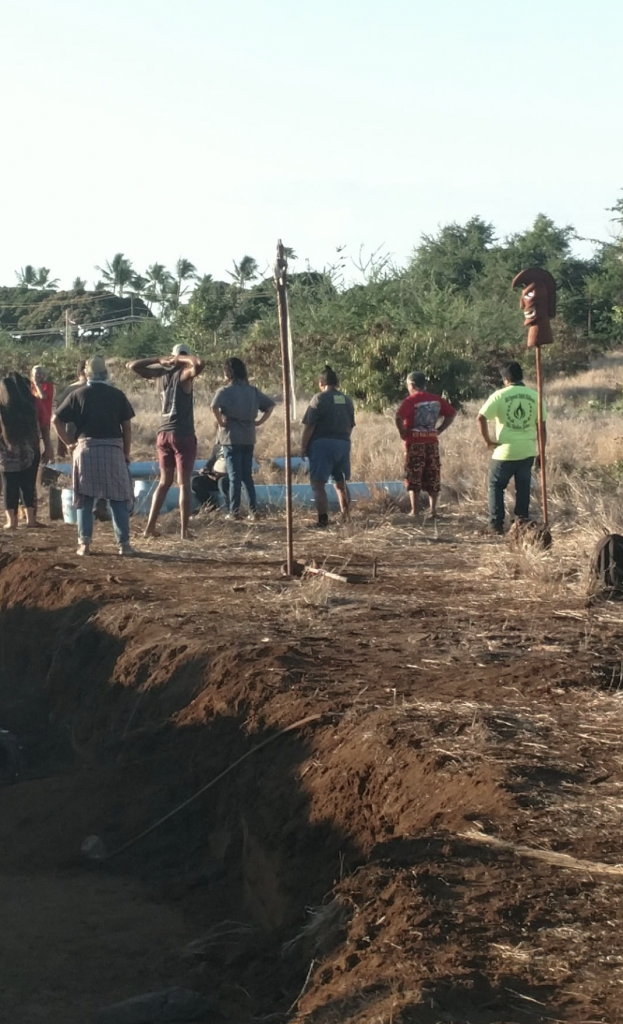 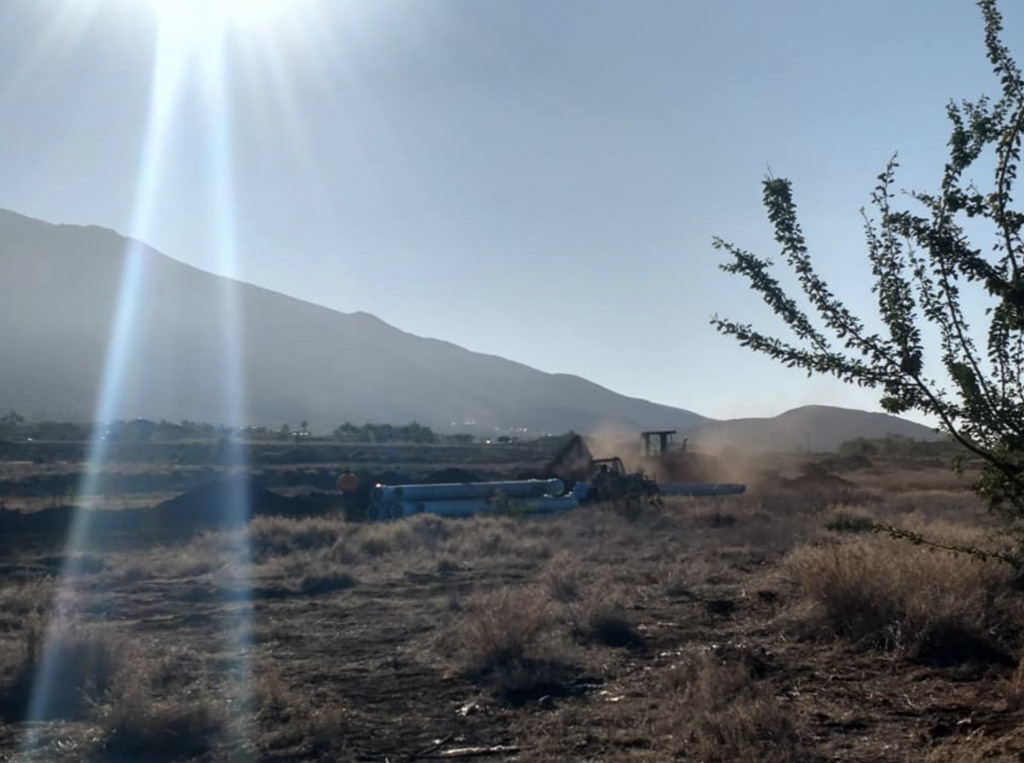 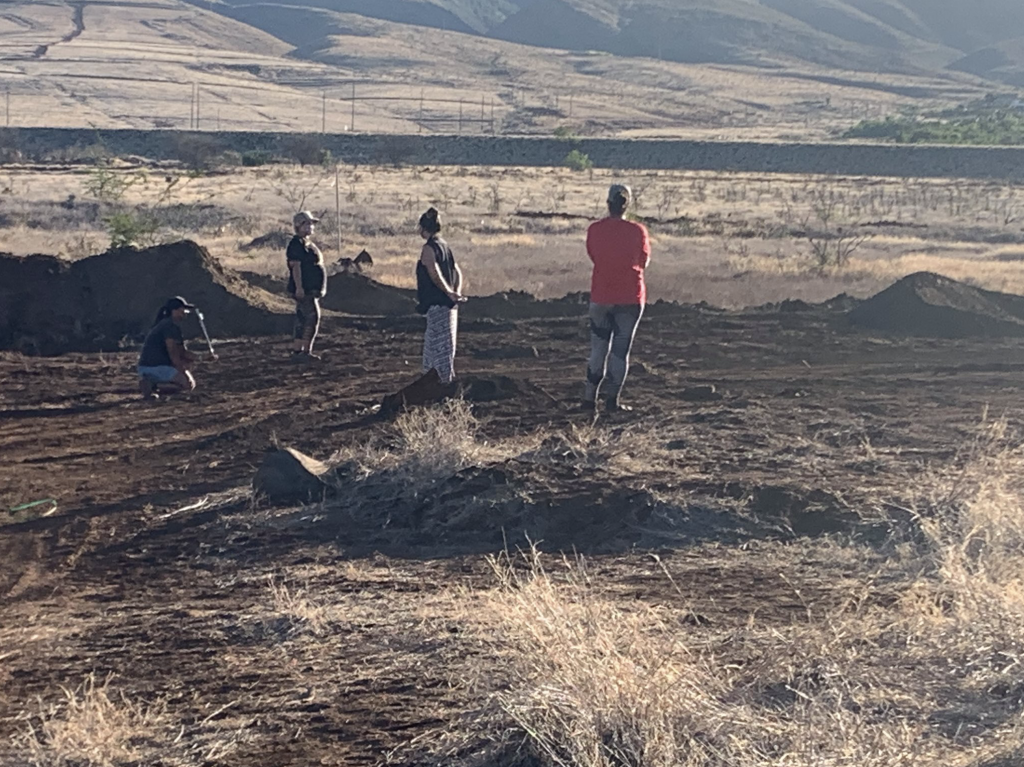 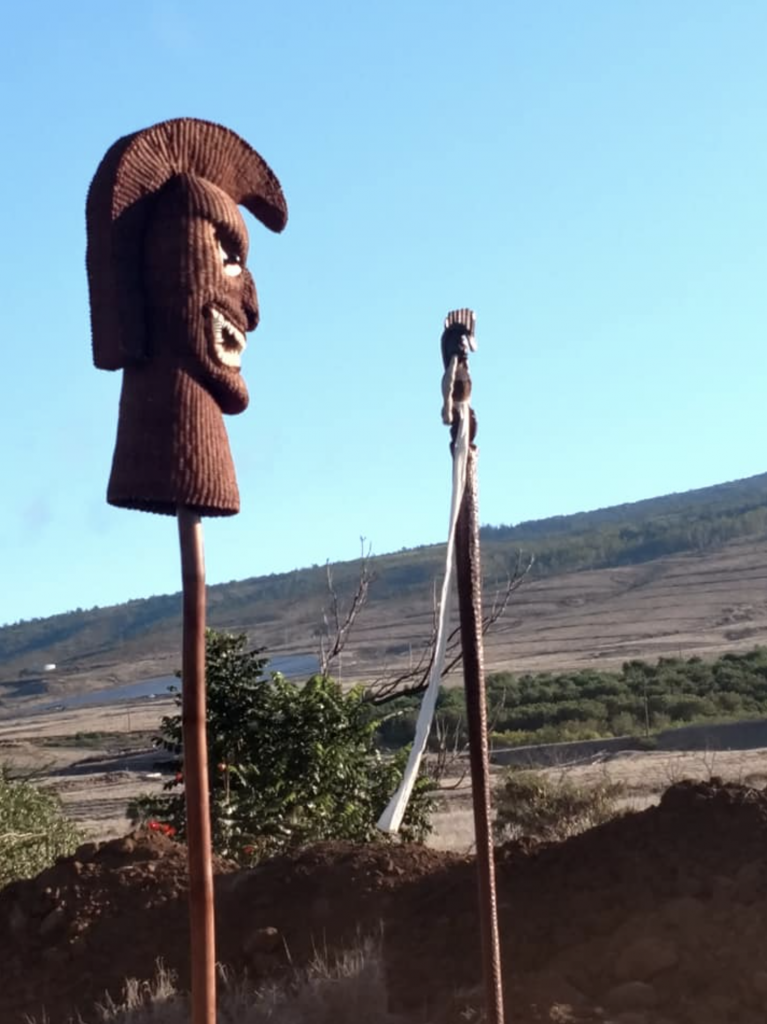 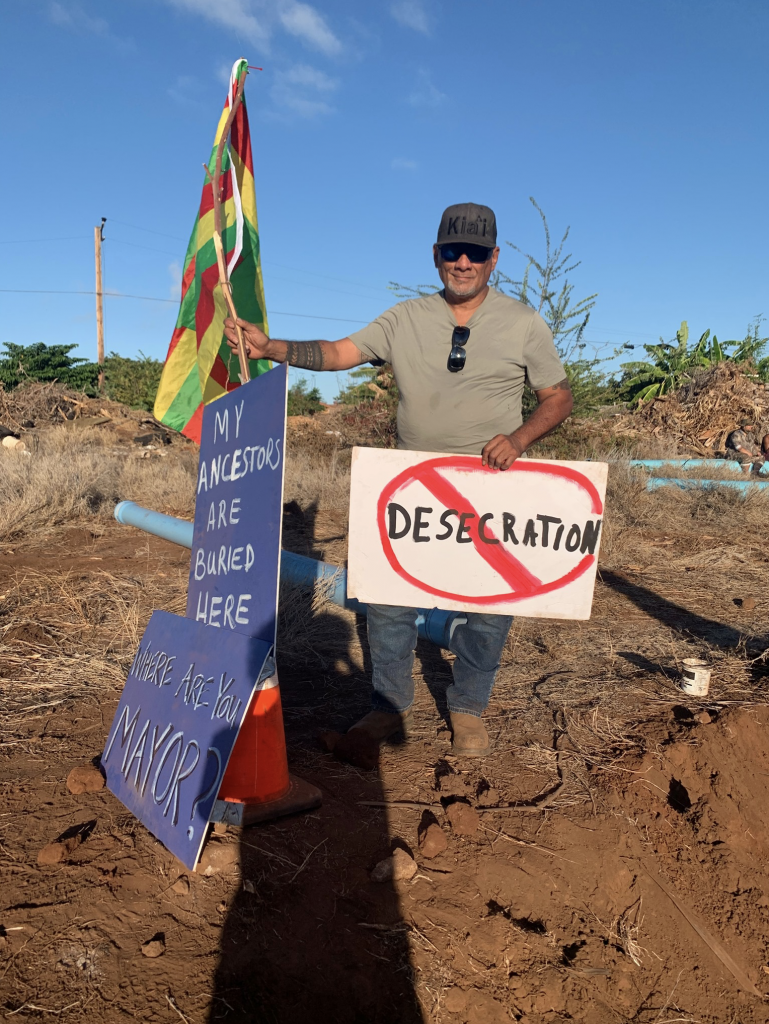