KOIEIE FISHPOND RESTORATION MOVES FORWARD ONE STONE AT A TIME

Project managers working to restore the Koieie Fishpond in Kihei want a deadline for completion lifted.Â  Work to revitalize the fishpond for educational, cultural and historic purposes began in 2005 and was slated for completion in 2007. 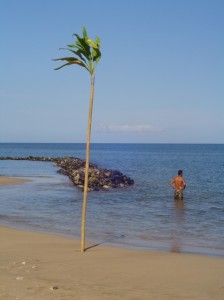 The project’s executive director listed a number of other factors that have hindered progress.Â  According to a letter written to officials with the state Office of Conservation and Coastal Lands, the agency noted that prevailing afternoon trade winds accompanied by wind-driven surf, has limited work on the wall to the morning hours.

There was a period of inactivity between the summer of 2007 and December of 2008, because of funding constraints; but the agency now has a full time staff person to administer the project and seek additional funds, and a dedicated volunteer to head the restoration of the wall.Â  Several grant applications are also under review to support the volunteer work and ensure the project’s progress. 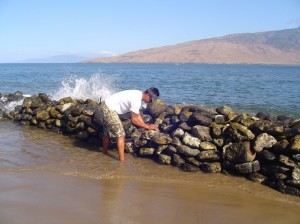 To date, paid staff and volunteers have successfully restored approximately 385 feet of the 1170 foot wall.Â  According to a report filed with the Board of Land and Natural Resources, staff members anticipate ongoing work and construction to be a normal feature of the project.