Attorneys for Lānaʻi resident Solomon “Sol” Pili Kaho‘ohalahala filed a petition last week to intervene in the Lānaʻi Planning Commission “use determination” proceeding involving a request to use agricultural land as a take-off and landing strip for unmanned aircrafts.

The request is being made by the Research Corporation of University of Hawaiʻi for its Lānaʻi High Altitude Platforms (HAPS) Drone project.

The project seeks to launch a program named HAWK30 to develop airborne 5G communications through the use of unmanned aircraft, according to information detailed in the minutes of a Lānaʻi Planning Commission meeting held in July.

According to the document, the program seeks to use “unmanned, low-speed, high-altitude, solar-powered, long-endurance aircraft flying between 65,000 and 80,000 feet for up to six months.”

According to a Kahoʻohalahala’s attorney, the request involves the use of 215 acres of agricultural land off Kaupili Road for take-off and landing of two 260 foot wide unmanned aircrafts.

In addition to 5G development, the HAWK30 program also seeks to provide watershed conservation and agricultural development mapping and surveying, according to a description of the project detailed in the planning commission minutes.

Kahoʻohalahala’s attorney argues that, a use determination approving the agricultural land for an industrial use, “would set a precedent for such uses on any agricultural land, well beyond the purported experiment.”

Kaho‘ohalahala, who lives a few miles from the proposed site, says he uses the undeveloped lands for gathering plants and other items necessary to his native Hawaiian traditional and customary practices, according to a press release issued by his attorney.

Kaho‘ohalahala‘s attorneys say these practices are “protected property interests under the Hawai‘i constitution, and “Use of these lands for aircraft development and flight operations would prevent him from continuing his practices here.”

Kaho‘ohalahala’s intervention petition cites his traditional and customary rights as well as other public interests in ensuring that Lānaʻi agricultural lands are put to appropriate uses.

“A determination by the Planning Commission that RCUH can use these lands for its drone aircraft project could mean someone else can come along later and build a second airport here,” said Kaho‘ohalahala, “that is not how we should be using the agricultural lands of Lānaʻi.”

He said airport expansion and other light industrial uses of 215 acres of central Lānaʻi, “could have large impacts” on the “small, rural community.”

According to information provided during a presentation at the July meeting, “Lānaʻi was chosen because of its isolation. The flat land, dominate trade winds and clear air space south of the island were some of the aspects that were looked in selecting Lānaʻi for the location of this project. And the location of the field where the aircrafts will take off and land is located just south of the airport.”

Kaho‘ohalahala submitted his intervention petition on Aug. 7, 2019 and is expected to be heard by the Commission at a future meeting together with the use determination request itself, according to his attorney.

The July commission meeting included testimony both for and against the project. Among those who testified in support was resident Alberta de Jetley who spoke of the economic benefits of the project:

“We’re talking about building a whole industry that will bring more jobs, less people, betters jobs, a better quality of life for all of us. We don’t want to keep bringing more hotels to our island. We don’t want to create more service industry jobs. We already have enough of those.”

Those against the project expressed concerns over the safety of 5G, the use of Lānaʻi as a testing ground and issues surrounding good faith by the applicant.

Simon Russell, a Maui resident who spoke on behalf of the group Hui O Malama Aina, said, “My concerns with 5G is untested technology. It really has no safety standards whatsoever.”

He further said, the “policy of not considering the environmental and health impacts before rolling out a technology is unacceptable.”

During a presentation by Munekiyo Hiraga, the land use planning consultant for the project, representative, Bryan Esmeralda said:

“The HAWK30 program is developing new airborne overhead communication which would provide strong wireless service everywhere including areas that don’t currently have service, and including over the ocean.”

Ted Ralston with the University of Hawaiʻi also provided information on the project during the presentation portion of the meeting saying:

“First of all this HAWK30 Lānaʻi Program, HAWK stands for the, is the HAWK, is the mascot of the company in Japan that’s providing this. 30 refers to the latitude, plus or minus 30 degrees where the sunshine is bright. For a solar airplane you care about latitude. The sponsors, HAPS Mobile in Japan. HAPS that abbreviation stands for High Altitude Pseudo Satellite, or High Altitude Platform System. Take your pick. It just means an airplane, that’s unmanned, flies in the stratosphere for a long, long time to do whatever mission you want, communications, information transfer, science experiments, whatever it might be. In addition, aero-environment which we heard about earlier from you is a partner on this out in California. And Alphabet Google Loon is another partner in this. Google, of course, is interested in access to the internet. HAPS Mobile is really interested in connecting societies around the world by information. So, that’s what’s behind it.”

Along with this wireless service, Esmeralda said the aircraft are able to provide additional services including “water resource monitoring, ungulate monitoring, information relative to public safety, disaster preparedness and search and rescue.”

According to Esmeralda, the focus of this project “is to support agriculture and conservation on Lānaʻi.

He explained the workings of the aircraft and its technology saying, “radio relays on the aircraft will project the radio waves downwards to the surface of the earth,” as opposed to traditional cellphone towers which he said project horizontally.

“In addition, sensors that will be installed at various locations to collect the watershed and additional data will be placed along the island and the aircraft collect the data from those sensors as it passes over them,” said Esmeralda.

He said the aircrafts are able to cover a wider area with less transmittal power resulting in, “strong, reliable wireless service and a broader network of coverage.”

In terms of the watershed research, Esmeralda explained that the project is meant to be in partnership with Pūlama Lānaʻi and existing DLNR watershed conservation efforts.

According to his presentation: “The sensors and the software applications that are being developed for this project will be able to provide continuous monitoring of the Lānaʻi Hale Watershed, and will report on data such as water levels, soil water content, wind and weather, and water quality. The data will be collected by a team on the ground with assistance provided by students at Lānaʻi High School through a STEM program that’s currently being developed. This program will also introduce drone work aeronautics and flight safety training into that curriculum.”

Other research capabilities of the aircraft reportedly include: surface watershed monitoring, subterranean ground monitoring, and ungulate presence and associated effects.

The proposal is for what is being called proof of concept, “so basically testing the ability of the airplane, the safety, and testing the technology. And if at some point, if following the testing Lānaʻi proves to be viable for this technology there,” Esmeralda said the applicant would look at additional phases including, further certification by the FAA and Federal Communications Commission, “and at some point, a more permanent operation if Lānaʻi proves to be viable.”

The project was brought forth by George Kauhi Purdy IV from Ulupalakua, Maui who is a 21 year airport fire fighter and a certified drone pilot. He is described his role as that of a coordinator.

By having this type of technology, Purdy said: “For me, it was to show the kids dream big, uncle going help, but I going need you to come here. I brought the canoe here. I’m the steersman. Now I need paddlers. That’s what I want. And if it’s only an opportunity and it’s short, at least they saw it, they touched it. They knew once it was real. That’s big.” 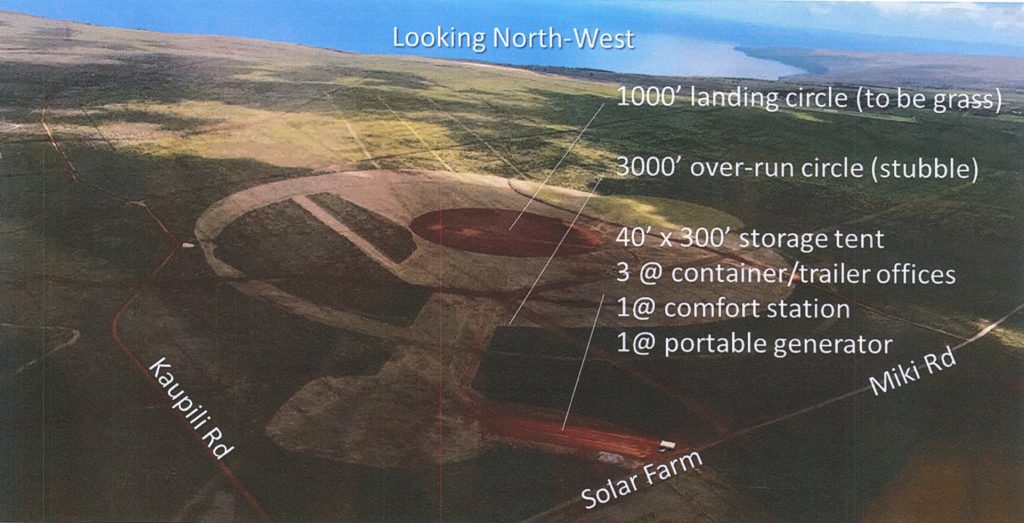 Image from Use Determination Application Lanai HAPS Drone Project prepared for the Research Corporation of the University of Hawaii. PC: Munekiyo Hiraga