A 50-year-old Colorado woman who was in Hawaiʻi for a two week trip in February, says she has since tested positive for COVID-19, the novel coronavirus. It is important to note that it is unclear where the woman contracted the virus and there are others in her area of Colorado that have tested positive–none of them to date are personal contacts of hers, to her knowledge.

The CDC says symptoms of COVID-19 including fever, cough and shortness of breath may appear 2-14 days after exposure. This particular test was taken 19 days after leaving the islands, but symptoms were present in the weeks before being tested.  With those factors in mind, this interview provides some background information of the woman’s trip given her lengthy stay in the islands and timing of her diagnosis.

*Below this full-length video interview is a recap of symptoms and a timeline of travel.

Lisa Merck traveled in the islands from Feb. 2 to 18 and was on Maui, Oʻahu and the Big Island of Hawaiʻi.  (Specific travel dates are provided at the end of this post).  Her six-day Maui visit between Feb. 13 and 18, was the final leg of her trip before returning home to Denver.

On Feb. 18, the day she was to fly back, she started having a “tiny, tiny runny nose,” and started “sneezing just a little bit. Got on the plane and my neck started hurting me on the left side and then my muscles started aching,” she said in a personal video.

Looking back she thinks this could have been the beginning of her illness, however she did not test positive until nearly three weeks later.

Merck said that after getting back to Colorado over the next week or two she started having muscle aches, she was nauseous and said she felt like somebody was “stabbing” her in her muscles “with an ice pick.”

Merck is a health care provider and says she got tested for Influenza A and B, but those tests came back negative. Her highest fever was 100.8.

On March 2, she called CDC and Public Health and says she was informed that she didn’t meet criteria for COVID-19 testing.

On March 8, she went to the ER and they did an additional Influenza A and B test (it was negative) followed by a chest x-ray and blood work. Her blood work showed low white blood cells and doctors told her she had a viral pneumonia.

Also on March 8, Merck was tested for COVID-19, and the test results came back on March 11, confirming that she was positive.

She and her husband have been in isolation at home ever since. She says the CDC did not ask which flight she was on.

A few details surrounding her itinerary are posted below.  “Unfortunately, I cannot possibly recall my daily encounters of a three week trip and notify each person I crossed paths with. I wish I could.  I’ve notified the CDC and public health of my time in places I can remember and have done my due diligence to notify all persons I can think of.” 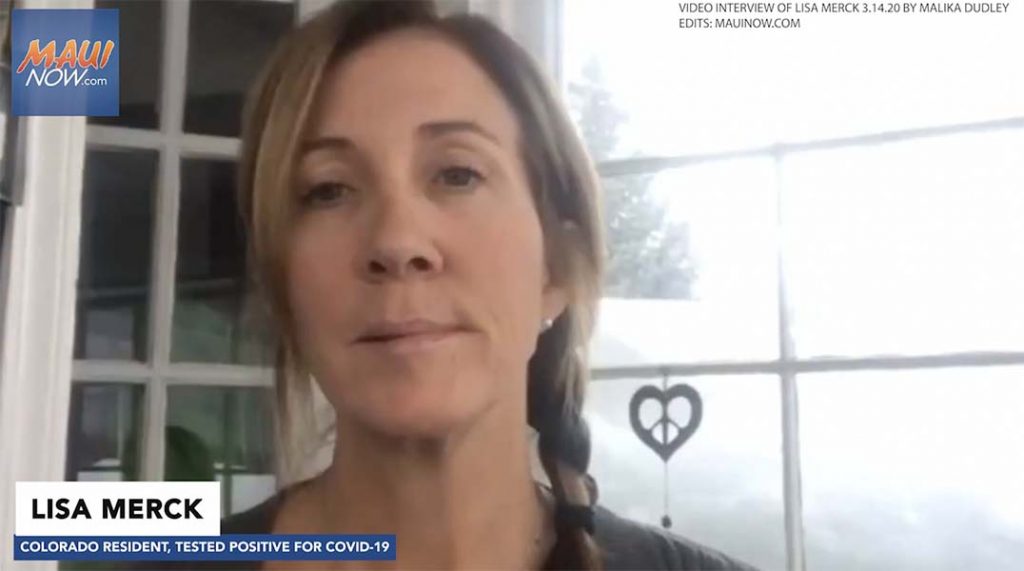