Two visitors to the island of Kauaʻi tested positive for the coronavirus or COVID-19, becoming the third and fourth presumptive positive tests in Hawaiʻi.  Authorities have since said the couple is originally from Indiana.

At this time, at least three healthcare workers (one on Kauaʻi and two on Maui) have been excluded from work because of possible exposure from the couple.

During a press conference today, Gov. David Ige said the couple–an adult male and adult female–traveled from the mainland on a direct flight to Maui, arriving on March 2, 2020 on United Airlines.  They stayed at a hotel in Lahaina from March 2 to 8.

Shortly after arrival, Case A developed fever, cough and shortness of breath.

On March 4, Case A was seen at an urgent care facility and was given a rapid flu test, which tested negative for flu.  On that same day, Case B started feeling ill.

On March 7, Case B was seen at an urgent care facility.  On March 8, both flew on Hawaiian Airlines Flight 149 to Kauaʻi.

From March 9 to 13, they stayed on Kauaʻi at the Kauaʻi Marriott. On March 9, Case A was seen at an urgent care facility and was prescribed antibiotics on Kauaʻi.

On March 12, Case A was seen at Wilcox Memorial Hospital, and at that setting, they informed the health care professionals that they had a close contact with an individual that was COVID-19 positive. Samples were taken on March 12, and both were confirmed as COVID-19 positive late last night.

“We are aware that three healthcare workers who were treating them were not wearing appropriate personal protective devices,” said Gov. David Ige.

The individuals have been contacted and they are in isolation at a facility on the island of Kauaʻi.

According to Ige, the coupleʻs situation has “improved so that they do not need isolation.”

Ige also noted that officials are continuing to investigate the locations the couple visited, and any individuals they may have made contact with.

The two new cases bring to four the number of COVID-19 cases in the state. The other two involved are on Oʻahu and had a recent travel history to locations where the disease was present.

On March 8, DOH tested a second presumptive positive test result for an elderly adult who is hospitalized in serious condition on O‘ahu. The individual felt ill on March 2 in Washington State and traveled home to Honolulu on March 4. The Centers for Disease Control and Prevention has been notified and trace back investigations are being conducted. The O‘ahu hospital has taken protective and preventive measures and is working with healthcare workers to ensure health and safety. Information is still being gathered and as more information becomes available, the public will be advised.

The first presumptive positive case was announced March 6. That individual was a passenger on the Grand Princess cruise in Mexico from Feb. 11-21. After arriving in Mexico, the individual traveled home to Honolulu with no symptoms. While home in Honolulu, the individual became ill on March 1, sought medical care and was tested on March 6. The individual is currently isolated at home and is being monitored daily by DOH. The department is conducting a detailed trace investigation to identify, notify, and provide guidance to all close contacts as quickly as possible. 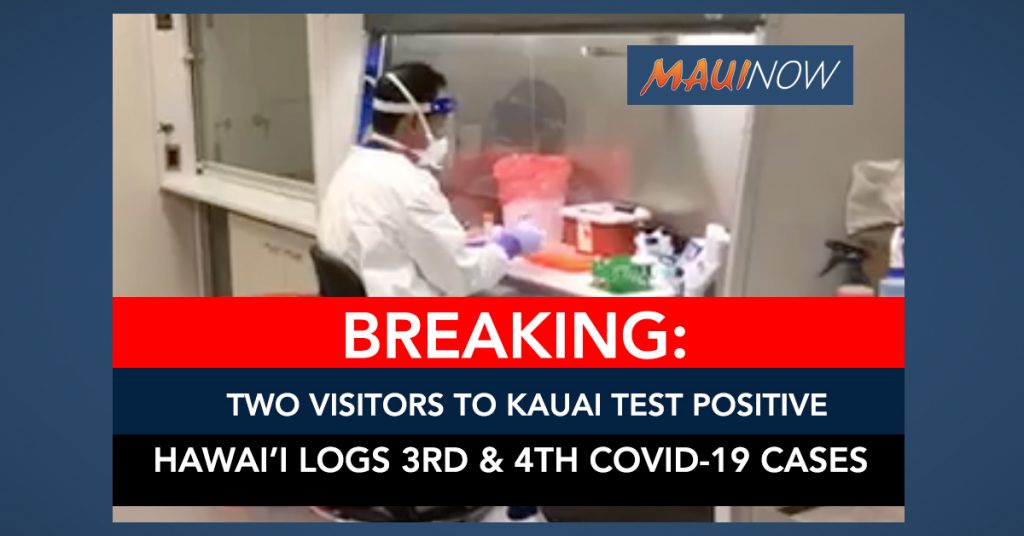