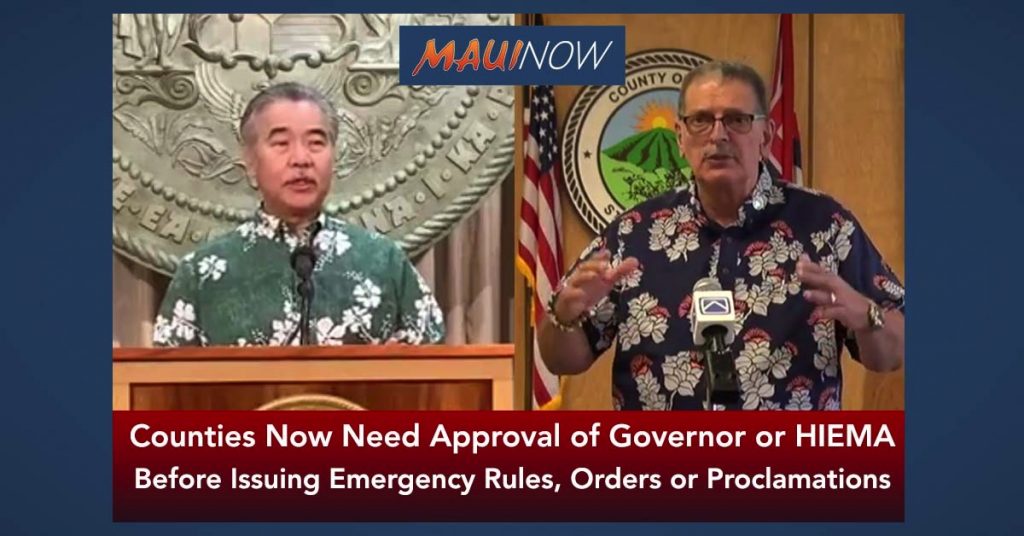 As the state and counties issue their own emergency rules, discrepancies have surfaced over the course of the pandemic, resulting in confusion over beach use, temporary curfews and stay-at-home orders to name a few.

Maui Mayor Michael Victorino said that in regards to the State’s authority and review of County rules, “our existing rules for the County of Maui are still in place.” However, “future rules and proclamations,” he said, “will need to be sent to the Governor’s Office.”

The statement comes as Governor David Ige issued a Sixth Supplementary Proclamation on Saturday, amending the state’s emergency rules to include an extension of the state’s stay-at-home orders and mandatory 14-day travel quarantine to May 31st.

The proclamation also has a section on statewide coordination in which the governor invoked section 127A-13(a)(5) of the Hawaiʻi Revised Statutes noting it is his “opinion that it is necessary to coordinate emergency management functions.

“Accordingly, I direct all counties to obtain my approval, or the approval of the Director of Hawaiʻi Emergency Management Agency (HIEMA), prior to issuing any emergency order, rule, or proclamation. I further suspend sections 127A-14(b) and 127A-25, HRS, to the limited extent necessary to ensure statewide coordination.”

In a statement issued today, Mayor Victorino said that the county mayors still need the flexibility and power to make immediate changes to protect the health and safety of communities and vowed to continue advocating “for the needs of our people.”

The latest state proclamation now allows for running and walking for exercise on state beaches.  Mayor Victorino had advocated for this exemption as long as social distancing was observed. “We continue to encourage using the ocean and beach for active exercise, but discourage gatherings or lounging on the beach.”

Maui Attorney, Lance D. Collins, Ph.D provides some clarification on the latest proclamation issued by Gov. Ige and how much of an impact it will have on rule-making powers of county mayors.

Collins summarized the impact saying, “In short, if the governor cannot work with the mayors cooperatively during this crisis, his alternative is to call the legislature back into session so that he can advocate for them to pass a bill to amend the emergency management law to allow him to have such power. He is not empowered to do so unilaterally.”