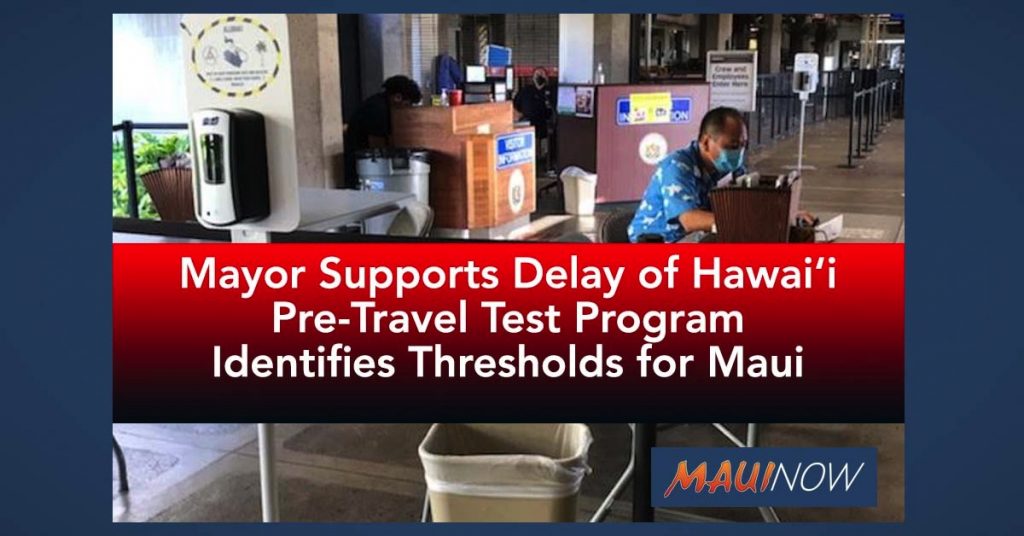 With surges in COVID-19 cases on Oʻahu and the mainland, Mayor Victorino expressed reservations about re-opening trans-Pacific travel and rolling out the state’s pre-travel testing program on the previously announced Aug. 1 date.

“When we set that date a few weeks back, things were really moving along quite quietly and we were in good shape; but things do change and they have changed and so we’re afraid to just say we’re going to open without many more considerations and the testing and other monitoring programs have to be in place to protect your well being, your health.

“We want the economy, we want your help.  We want everything to work together, but until they are we’re going to be holding off.”

Governor David Ige released a statement today saying meetings held this week with the four county mayors were productive, but an official announcement is not yet ready.  “The mayors and I have had productive meetings this week about the pre–travel testing program. We are assessing the current situation in Hawaiʻi and on the mainland, and we’ll make an announcement when we are satisfied that the plans will protect the health and safety of our residents and guests,” said Gov. Ige.

During a media briefing this afternoon, Mayor Victorino was asked if he had a target date in mind.  He responded:

There are 28 new COVID-19 cases reported for Hawaiʻi today, including–25 new cases on the island of Oʻahu, one each on Maui and Hawaiʻi Island, and one resident who was diagnosed outside of the state.  This brings the statewide count to 1,158 cases in Hawaiʻi over the course of the pandemic.  Hawaiʻi also recorded its largest single day COVID-19 increase with 41 cases on Tuesday, most of them on the island of Oʻahu.

“Where we are right now, we are not considering opening because the case load has been growing quite substantially especially on Oʻahu, which is the center of all of our commerce.  Everyone basically goes to Oʻahu right now that needs to go to any other neighbor island.  So the concern factor is there,” said Mayor Victorino.

When asked about the threshold of comfort for COVID-19 case loads on Maui before considering a reversal on already lifted restrictions, the Mayor also provided an estimate.

“For here in Maui County if I had a week, seven days or more of 10 (new positive cases) a day or more, I’d be looking to slow it down–shutting down, pulling back if that was necessary,” said Mayor Victorino, noting that he has been in regular consultation with doctors at the state District Health Office and Maui Memorial Medical Center.

According to county officials, a plan will be discussed next week identifying thresholds.  Mayor Victorino said he, “will discuss some of the thresholds that we are all working on now, to make sure if they are met and we reopen, they are kept… that’s going to be the premise of reopening Maui County.”

“All of us mayors have a number of concerns and I think they are pretty universal,” said Mayor Victorino.

“One, we want a testing system that is very accurate. We have to be up there in the high 90 percentile as far as accurate, efficiency and availability. We can’t have people moving around the nation, coming to Hawaiʻi–visitors–without making sure that they are safe, they are not contagious,” said Mayor Victorino.

“With that being said, there is no fail safe area. So again, we would want to require them wen they come to have a test showing they’re negative. If they don’t then they can’t come or will have to be quarantined for 14 days in a special quarantine hotel.  These are some of the things we are working on right now. There’s still many facets that haven’t been completed,” he said.

According to the mayor, there are a number of apps that the state is working on to track people if they leave their facility that are under quarantine.

“There’s a number of facets that we’re working on right now to make sure that when we reopen, whether it’s August 1, August 15, September, whenever, it will be safe for your wellbeing–you, the people of Maui County and the state of Hawaiʻi–that your health and safety is the priority… and that those guests that are coming know that they’re coming to a safe place.  So honor us and respect us by doing the same thing,” said Mayor Victorino.

During the pandemic more than 200,000 Hawaiʻi residents lost their jobs and filed for unemployment.   The state is also projected to face billions of dollars in budget shortages as it deals with economic impacts.  With both factors in mind state and county leaders continue to weigh the benefits and challenges of potentially pushing back the return of tourism to Hawaiʻi.