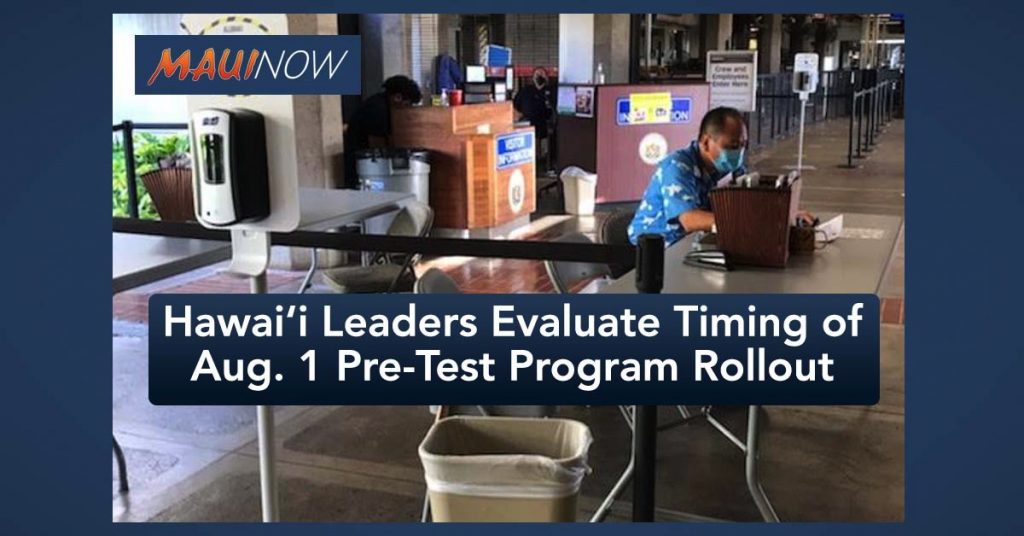 During the pandemic more than 200,000 Hawaiʻi residents lost their jobs and filed for unemployment.   The state is also projected to face billions of dollars in budget shortages as it deals with economic impacts.

With both factors in mind state and county leaders continue to weigh the benefits and challenges of potentially pushing back the return of tourism to Hawaiʻi as cases continue to surge in some mainland locations.

County of Maui Managing Director Sandy Baz responded to media questions related to trans-Pacific travel during a briefing on Wednesday saying, “Economics is one factor in decision making.  Health is another factor.  So we definitely need to evaluate those–the capacity of our health care system is one of the biggest factors we look at. All of those are going to be evaluated. Yes, every decision we make obviously has an economic impact.”

Baz sat in for Mayor Victorino during the daily press briefing on Wednesday as the Mayor met with the Governor and other county mayors.  When asked about potential changes to travel restrictions Baz responded saying, “We hope to have things resolved. They are in discussion, so that obviously meant that there were things to talk about,” said Baz, noting that official word on outcomes of that meeting were not immediately available.

Governor David Ige issued a statement this afternoon saying, “The mayors and I met yesterday and are meeting again today to assess the current situation and discuss what it might mean for the state, including the planned pre-travel testing program. We are getting input from community leaders as we carefully consider the health and safety of our residents and the financial health of our communities because we know they are interconnected.”

On Tuesday, Gov. Ige addressed media questions related to a potential rollback saying, the state is monitoring the conditions across the country.  “Yes, we are aware that there’ve been record new coronavirus cases in Florida, Texas and California.  Clearly, one of the reasons we are looking at this pre-testing program is to create some way of limiting who is coming into the state.”

Gov. Ige described the system being developed as one that is “layered,” and that the pre-test is just a part of that.  “The thermal screening and temperature taking at the airport is a part of that, but we are also working with the hotels and the tour companies, extending the public health system to include them as partners.  We will be asking them to initiate education programs for the visitors who come here that will not only focus on Native Hawaiian culture and appropriate respect and behavior; but also begin to include protection of the environment–and now what public health responsibilities the guests would have,” said Gov. Ige.

According to the Governor, the state is expanding the capacity of the Department of Health to work with facilities and attractions to help identify those who travel here who may become symptomatic once arriving.

He also described the pre-test as a “point-in-time,” result. “It demonstrates that someone was not infected with the virus when they took the test.  We want to build a layered system that will allow us–if they arrive here and are not in quarantine–to allow us to know if they should become symptomatic, and allow us to deliver health care services and a follow-up test should they become symptomatic so that we can isolate them and treat them,” said Gov. Ige.

“We are definitely concerned as Dr. Anderson and Dr. Park had said, clearly there has been an increased number of the cases that we’re seeing.  We continue to monitor what happens here in the islands and we are looking at what is occurring outside of the state,” said Gov. Ige. “I think that’s what makes our situation challenging.  As you are aware, internationally, because the number of cases in the US continues to rise, most nations have blocked travel from the US into these foreign countries.   So clearly, we are aware of what’s happening; we are monitoring; and certainly we are concerned what adjustments need to be made to the August 1st program that we had announced,” he said.

Gov. Ige also discussed the threshold at which the state would consider reversing its openings.  On Tuesday he said, “There are many factors that will be going into making the decision about either changes or continuing with the announced programs that we’ve made.  We continue to work with the mayors and county officials, trying to make the determination about what would be safe.”

The Governor met with County Mayors on Wednesday to discuss these issues.  “We continue to see the health care system respond, and so unlike other jurisdictions–and I know we’ve all seen the stories about Texas, about Florida and even some parts of California–where ICU units are getting filled and certainly the hospital capacities are getting threatened.  We do not have any of those conditions here in the islands.  We continue to have a low hospitalization rate for those who are COVID positive,” said Gov. Ige.

He did not provide a specific number in terms of cases needed in Hawaiʻi to result in a particular action.

“I hope the takeaway from the 41 cases today is that it is a wake-up call for all of us the COVID is still a threat in Hawai‘i.  Before the governor imposed the 14-day quarantine, we were projecting case in the hundreds of cases a day.  Of course California, Texas, Florida… they are experiencing thousands–in fact in Texas tens of thousands a day.  The disease is still there.  I think our success in keeping this disease where it has been is one of our great challenges now. People are used to going out and about and not feeling the risk of COVID and they have let down their guard,” said Dr. Anderson.

“We have to keep up that social distancing–wash your hands; wear the masks and obviously don’t go to work when you’re sick,” said Dr. Anderson. “That’s the only thing that’s going to make a big difference,” he said asking the public to do their part.