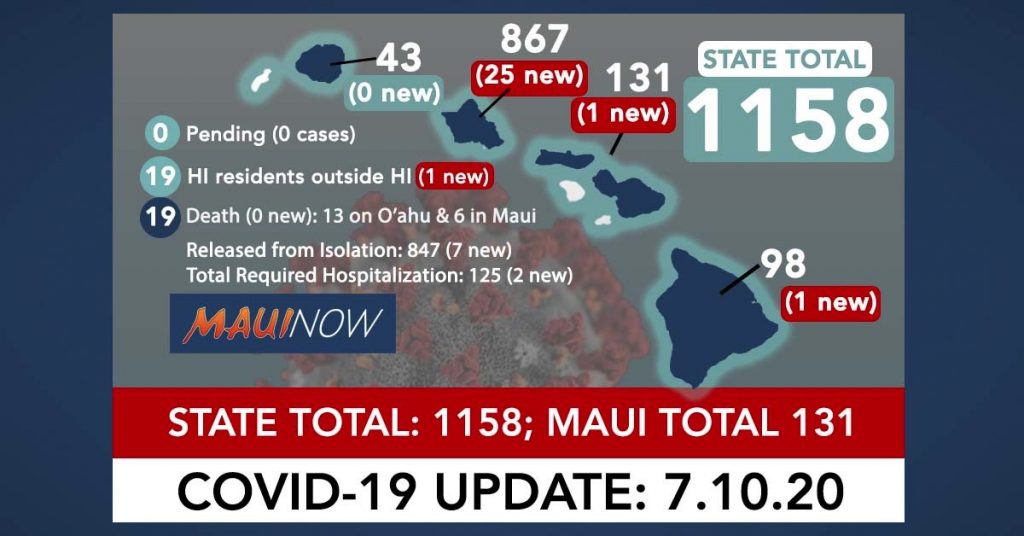 There are 28 new COVID-19 cases reported for Hawaiʻi today, including–25 new cases on the island of Oʻahu, one each on Maui and Hawaiʻi Island, and one resident who was diagnosed outside of the state.  This brings the statewide count to 1,158 cases in Hawaiʻi over the course of the pandemic.

The majority of coronavirus cases being reported over the past few weeks are associated with clusters – meaning people were infected by others in groups or at gatherings. Twenty-two of the newly reported cases are residents, two are non-residents, and the residency of four cases is unknown at this time.

Contact tracing by the Dept. of Health has uncovered a total of 17 cases to-date involving two O‘ahu commercial gym facilities. DOH says cases in both gyms are linked to one person who participated in exercise classes at both.

The Hawaiʻi State Department of Health reports that there were 847 individuals released from isolation; and 125 cases (11%) that have required hospitalization. A total of 1,058 patients (91%) were residents.

In Maui County, cases with onset in the last 28 days have been in the Lahaina, Makawao, Kīhei and Wailuku zip codes.  Of the 130 cases documented in Maui County over the course of the pandemic, Wailuku, Kahului and Lahaina had the most cases (more than 20 cases each); followed by Kīhei (11-20 cases); Makawao and Spreckelsville (6-10 cases); and Kula, Hāna, Haʻikū and Molokaʻi (1-5 cases each).

State and county leaders continue to weigh the benefits and challenges of potentially pushing back the return of tourism to Hawaiʻi as cases continue to surge in some mainland locations.  Today, Gov. Ige said:  “The mayors and I have had productive meetings this week about the pre-travel testing program. We are assessing the current situation in Hawaiʻi and on the mainland, and we’ll make an announcement when we are satisfied that the plans will protect the health and safety of our residents and guests.”