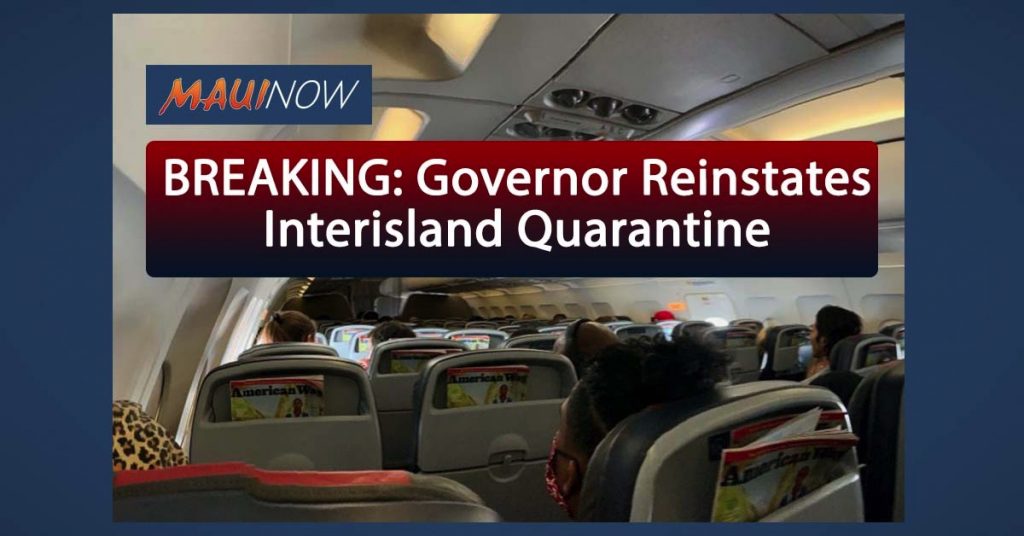 Governor David Ige this afternoon announced he is reinstating the mandatory 14-day interisland travel quarantine.  He clarified following the press conference that this is a partial reinstatement and applies to travelers arriving in the counties of Kaua‘i, Hawai‘i, Maui and Kalawao. The quarantine requirement applies to any person traveling to these islands and between these islands. It does not include inter-island travelers arriving on O‘ahu.

This takes effect on Tuesday, Aug. 11, 2020, and remains in effect through Aug. 31, unless terminated or extended by a separate proclamation.

After further discussions with Attorney General Clare Connors, Gov. Ige has decided that he will approve the inter-island travel quarantine only for travelers arriving in the outer island counties listed above. The quarantine requirement applies to any person traveling to these islands. The period of self-quarantine will begin immediately upon arrival and last 14 days or the duration of the person’s stay on the island, whichever is shorter.

The Attorney General’s Office is finalizing an 11th emergency proclamation that Gov. Ige will sign before Tuesday. The proclamation is being issued in response to the recent resurgence of COVID-19 cases on O‘ahu, which is the result of large gatherings in uncontrolled environments.

“I have been working closely with all of our county mayors and we agree that reinstating the inter-island travel quarantine is necessary and the right thing to do at this time. We must protect our neighbor island residents in light of the alarming increase in COVID-19 cases on O‘ahu,” said Gov. Ige.

A separate quarantine for arrivals from out of state remains in place through at least the end of August.

In making the announcement, Gov. Ige said, “There’s no question the virus is surging.”   He said the decision came amid record high numbers on Oʻahu and an increase in hospitalizations.

We asked Gov. Ige if there would be stricter guidelines in place for essential workers who have had travel exemptions under the previous quarantine, in light of concerns raised on Lānaʻi where two contract workers tested positive for COVID-19 after working on the island last week.

He responded saying, “There is a provision for essential workers being exempted, but it is clear that any exemptions would be allowed to perform the specific duties and work for which they are exempted, but they would be under quarantine outside of executing their official and essential business.  So we’ll be working with all of the counties to get consistency about those who would be exempted, especially the conditions when they are not performing their essential activities.”

Maui Mayor Michael Victorino issued a statement this evening in response to the quarantine that he had been asking for since July 24th.  He said:

“We appreciate the Governor for following our request and making the difficult decision to reinstate the mandatory 14-day quarantine for interisland travelers. As cases continue to rise exponentially on Oʻahu, bold actions need to be taken to protect our communities on the Neighbor Islands. We pray for our friends, family and loved ones on Oʻahu, and remain committed to support the Governor and other counties on curbing the spread of COVID-19. I also want to remind everyone to do their part and know that we will get through this pandemic together.”

Gov. Ige said that in conjunction with Honolulu Mayor Kirk Caldwell, he has agreed to reinstate restrictions on Oʻahu. “We agreed that we wanted to be more targeted to minimize more damage to our community, while keeping our community safe,” said Gov. Ige noting that the strategy is to eliminate large gatherings both indoors and outdoors and do a better job with enforcement.

Under the order, all city and county parks on Oʻahu–all 300 of them will be closed.  This includes beaches fronting parks, and all state parks and beach parks. No activities will be allowed on beaches or in the parks; however individuals can traverse the parks to get to activities in the water to swim, dive, fish and conduct Native Hawaiian gathering rights.   Individuals can also still utilize bathrooms. Again, this order is specific to the island of Oʻahu.

According to Mayor Caldwell, fitness centers are allowed to remain open, but they will not be allowed to do group classes. Also on Oʻahu, all team sports in any city and county parks are suspended through Sept. 5.   Mayor Caldwell’s recommendations also includes the closure of all bowling alleys, arcades and miniature golf facilities.

For restaurants on Oʻahu, those in the kitchen cooking will be required to wear face coverings. All city pools, private club pools and tennis clubs on Oʻahu will be closed.

Golf courses will be open, but will roll back to Phase 1 golfing on both public and private courses on Oʻahu.  “What’s open are things that we can control, and where we’ve seen compliance. That remains things like restaurants, personal services–whether it be hair salons, pedicure, massage, tattoo, spiritual services, museums, art galleries, movie theaters,” he said.

“But here’s the other part of this order–I believe the most important part–that is about enforcement, effective enforcement.  On an island of a million people crowded together, with the burdens that we are placing on our Honolulu Police Department, we are extremely grateful that Chief Susan Ballard and her police officers have stepped forward to do even more ramped up enforcement,” said Honolulu Mayor Caldwell.

Honolulu Police Chief Susan Ballard said the department will be instituting a COVID Enforcement Hotline, starting Sunday morning at 10 a.m.  The number is 723-3900 and the email address to report COVID-19 enforcement complaints only is [email protected].

In addition to that, the HPD has created a COVID Enforcement Team that will be responding to complaints as well as proactive patrols, especially where there are large gatherings present, according to Chief Ballard.

“In addition to regular patrols, and our other regular officers who are out on the road, there will be an additional 160 officers islandwide, seven days a week in all of our eight districts doing strategic enforcement,” said Chief Ballard.

The added resources are being funded by the CARES Act, and will be all on overtime. If this continues in the same capacity through December, it would amount to about $13 million, but would depend upon compliance.  If the added enforcement is able to end in September, the cost would be significantly less, according to Chief Ballard.

“We have 28 days.  Let’s show that we can do this.  And when we reopen, let’s follow the rules,” said Chief Ballard.

Governor Ige said he is working with all counties to develop more coordinated efforts to enforce quarantine and other restrictions.  According to the governor, the state is developing a digital platform to provide data to all counties in realtime about those who are subject to quarantine.  The projected timeline for this program was not identified during the press briefing.

The state had initially announced plans to start a pre-travel COVID-19 testing program for arrivals into the state on Aug. 1, but last month, the governor announced the launch would be delayed by a month to Sept. 1.

Now, with the surge in cases on Oʻahu, and a partial reinstatement of the interisland quarantine, Gov. Ige said the state continues to evaluate conditions. Discussion continues with the state Department of Health and the county mayors.  Gov. Ige said an announcement related to the Sept. 1st date will be made “as soon as possible, within the next week or so.”

Status of Public Schools and the University of Hawaiʻi:

Gov. Ige said he has been talking with the state Superintendent of Schools and both are monitoring the situation.

“We’ll be discussing this specifically and making an announcement specific to schools as well as the University of Hawaiʻi soon,” said Gov. Ige.

Gov. Ige said there’s a lot of details that would go into an announcement like training that’s occurring separate from the students. Currently, students are set to resume instruction on Aug. 17. Gov. Ige said the DOE would have to work through the details of who would be impacted and who wouldn’t if any changes are made.

*View live stream below: courtesy Office of the Governor/ Facebook.

The state initially recorded 53 new COVID-19 cases as of noon, but updated that figure at around 5 p.m.,  saying 152 individuals have tested positive for COVID-19 today.  The initial figure was an undercount as a result of technical difficulties with their electronic laboratory reporting system.

State Health Director, Dr. Bruce Anderson noted that there are 117 hospitalized patients statewide–115 of them on Oʻahu.

The count brings the total cases in Hawaiʻi over the course of the pandemic to 2,914. To date, 1440 cases have recovered, 225 individuals have required hospitalization and there are currently 1445 active cases in the state, an estimated 95% of them on the island of Oʻahu.

Seven of the past nine days have been in the triple-digits.  Last week’s high numbers were partially attributed to a backlog from closed labs during Hurricane Douglas.  This week’s high numbers have been partially attributed to delayed reporting over the weekend, a result of private clinical laboratory reporting issues. Health officials yesterday said the high numbers demonstrate that people should not be letting down their guard in terms of prevention measures.

There were also two COVID-19 related deaths reported today, bringing the statewide total to 29 since the pandemic began, including 22 on Oʻahu, six in Maui County, and one Kauaʻi resident who was hospitalized in Arizona. Hawaiʻi has a mortality rate of 1.9 deaths per 100,000, according to Lt. Gov. Green. Prior COVID-19 related deaths are posted here.