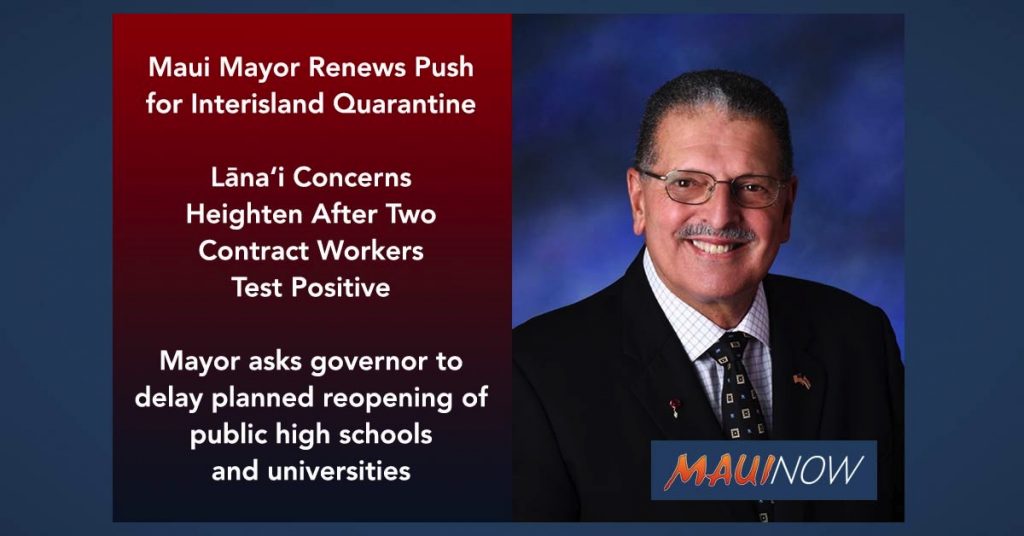 Citing concern over ongoing triple digit daily COVID-19 counts on the island of Oʻahu, Maui Mayor Michael Victorino is renewing his request to reinstate the interisland travel quarantine. This comes after an initial request made nearly two weeks ago on Friday July 24, amid record increases in cases statewide.

He’s also asking the governor to delay the planned reopening of public high schools and universities.  And he’s encouraging those who don’t have to travel to refrain from doing so, citing an incident on Lānaʻi last week in which two Oʻahu contractors ended up testing positive after returning home.

“I want the public to understand that these changes will not be just made by the governor, but also by us mayors.  The mayors will be involved in all of these changes so that we will make sure that your well being and health is the priority,” said Mayor Victorino during an afternoon press conference from the County Building in Wailuku.

“I have renewed my request to the governor once again to reinstate the 14-day quarantine for interisland travel… I think the time has risen.  I said this two and a half weeks ago, and we’ve let it go to this point; and we look at what’s happening around us.  I think we’re in trouble,” said Mayor Victorino.

“Over the past week we have nearly 900 new cases, and right now we have 1,300 active cases,” said Mayor Victorino, pointing toward the statewide numbers.  While the vast majority of active cases are on the island of Oʻahu, Mayor Victorino noted that there’s potential impact in Maui County.

“Let’s be honest, the commerce and many other interactions between the counties flows through Oahu. And so we understand that’s two-thirds of our state population… and commerce, government, everything we do really traverses Oahu,” said Mayor Victorino. “We’ve got to make sure we work together to make sure we protect ourselves and help them get out of their state of this pandemic.”

Mayor Victorino said he anticipates hearing back from the governor in the next day or so, and said he’s confident Gov. Ige will set something up to address the concern shortly.

He pointed toward a recent incident in which two contractors from Oʻahu, who were working on Lānaʻi from Tuesday through Thursday last week, had returned home to Oʻahu with symptoms and ended up testing positive for COVID-19.

“I know there’s been some anxiety by the people on Lānaʻi… At this point, I’ve asked that any testing that’s needed to be done, Pūlama Lānaʻi has agreed to do it.  So if you need to get tested, please go ahead and get tested.  At this point, we have no cases there and we’re trying to make sure that it doesn’t happen,” said Mayor Victorino.

“I’ve been told that there’s been very little contact, but until we determine that by the Department of Health, I reserve any more comments in this area,” he said.

“Oʻahu has a worsening situation and we keep praying for our brothers and sisters there that they will… follow the rules, wear their masks, practice good hygiene and all the other policies,” said Mayor Victorino, expressing concerns that ongoing high case counts could end up taxing the state’s health care system.

“If you don’t have to travel right now, I recommend not traveling.  If you have to for medical reasons, or essential services, then please be careful,” he said.

The mayor also asked the governor to keep Maui County in the Act With Care phase, which is where we have been for the last month. “This means not shutting down any businesses or limiting any services that are currently open.  That includes churches, so long as they’re practicing good physical distancing.  This includes sporting events where physical distancing and gatherings are not allowed.”

“This also means our beaches and our beach parks–we are not going to allow tents (pop-up tents) and large beach umbrellas to be placed around so that people will gather around these particular items,” he said.

Mayor Victorino is also asking the governor to delay the planned reopening of public high schools and universities.

“The private sector I think has done a terrific job.  Many of the plans that have been set down, plus the low number of student body that are in those schools have not challenged me in the area of reopening, so I agree.  So long as they do good physical distancing, good sanitation, wearing of masks and protecting the students and their families, I’ve agreed to let them reopen for the new school year,” said Mayor Victorino.

His request is beyond the board approved Aug. 17 restart date that was approved last week.

“With this outbreak on Oʻahu and the large numbers, I think there is strong consideration of maybe even pushing that back further, or opening up just to virtual or distance learning,” said Mayor Victorino.  “We should not open until we are totally ready to open our public schools and the public universities,” he said, expressing a concern with out-of-state students coming in and protocols in place.

Board members said the delay provides assurances that health and safety preparedness concerns relating to COVID-19 are being addressed and that there’s enough time for employee training in protocols and virtual learning tools.

The board postponed action on a separate motion that sought to waive the statutory law that requires 180 days of instruction, and will revisit the matter at a later date.