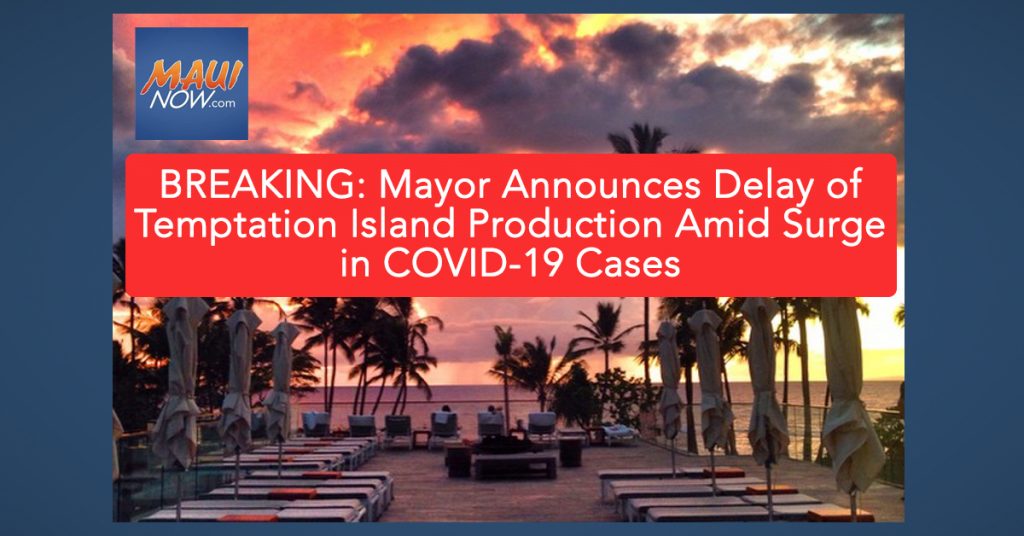 Mayor Michael Victorino announced that production on the television show Temptation Island has been delayed due to current COVID-19 health and safety concerns in Maui County.

This comes a day after the mayor had confirmed filming of the reality TV production at the Andaz Maui at Wailea Resort through mid-October.

“After speaking with the production company, Andaz Maui at Wailea Resort, the ILWU hotel worker union and our County Film Office, we all agreed to delay production of the show at this time. This was a very difficult decision due to the financial impacts to our local union film workers and hotel workers as well as to the film production company. However, considering the recent surge in cases on our island, all parties agreed to delay the show before production began,” said Mayor Victorino in a statement this afternoon.

“We appreciate the leadership of Andaz, ILWU, IATSE Local 665, the production team and the Governor’s Office for working with our office to address these concerns. We look forward to supporting the film production and other projects for our local workers and economy once case numbers decrease in our community,” he said.

Yesterday’s news prompted heavy criticism in the comment section of our online post from residents who questioned the approval amid a surge in COVID-19 cases. Others expressed concern over conflicting messages that the production was being allowed while travelers were being told to delay non-essential travel.

When the mayor was asked about the production during a media briefing on Thursday, he said he was “not excited about the prospect,” but saw some benefit in some unemployed ILWU hotel workers getting back to work.

“There were a lot of challenges and with the large surge at our hospital, it became very apparent that this couldn’t happen right now.  We needed to step back.  So upon my request to the producer, the hotel , the unions involved and others, they have decided to delay the filming of temptation island to a later date.  I’m very thankful that they were able to come together, we were able to put a halt to it for right now until things look more stable and our case counts drop,” said Mayor Victorino.

Relating to the content and subject matter of the production, the mayor said he would be setting up a group made up of business, private sector and nonprofits that are indicative of the community to provide advice and ensure the interest of the community are considered in the future.

“The industry complies with all of the existing mandatory quarantines,” said Gov. Ige in response to our inquiry during a press briefing held on Thursday.  “If they do have cast and crew that are coming in from out of state, they do fulfill the mandatory 14 day quarantine.  As an essential worker, they can be in quarantine in the hotel.  If they go directly to a film site, they can film and then they are required to return to quarantine… In addition the industry and the unions have agreed to strict protocols for testing all individuals involved with the production.”

The delay comes as the mayor mulls a potential reinstatement of restrictions with a focus first on gatherings if Maui’s COVID-19 community response does not improve by Monday.

Today, Maui had a single positive COVID-19 case confirmed by the state Department of Health, but the county also recorded its seventh death (45th statewide) since the pandemic began.  Details on the case are forthcoming.