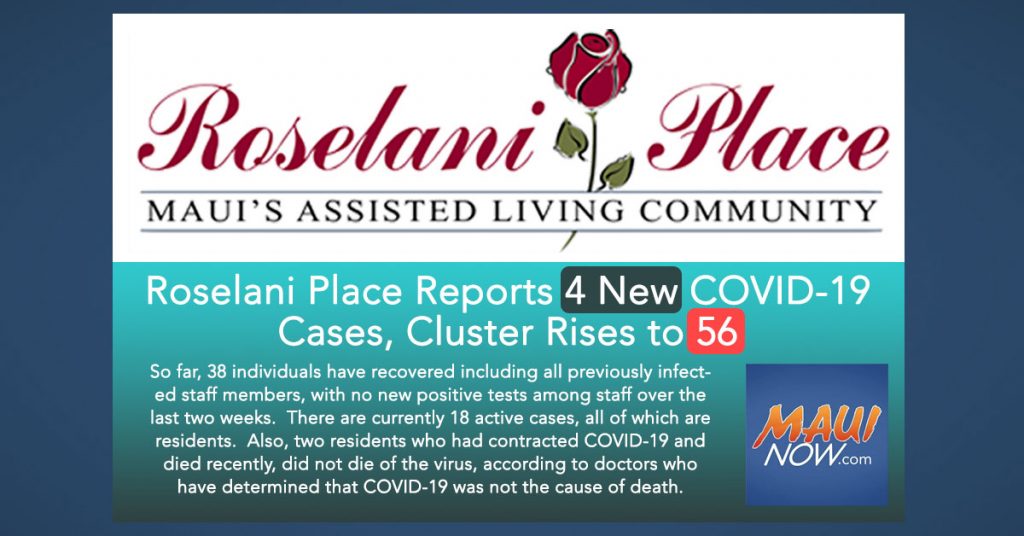 Four new COVID-19 cases were reported at the Roselani Place assisted living community on Maui since last week, bringing the total number of infections reported at the facility to 56 since mid-August. The positive cases include 28 staff and 28 residents.

So far, 38 individuals have recovered including all previously infected staff members, with no new positive tests among staff over the last two weeks. There are currently 18 active cases, all of which are residents.

This week, one resident of the facility tested positive for a second time, after four consecutive negative tests.

Karl Drucks with Paradigm Senior Living, the management company for Roselani Place Senior Living reports that two residents who had contracted COVID-19 and died recently, did not die of the virus. He said doctors and have determined that COVID-19 was not the cause of death in those two cases.

“Similar to last week, we have been directed to continue testing staff every three days given we have no active staff cases. This may change, depending on future test results,” said Drucks.

According to Drucks, positivity testing is down to 2.88% (three positives out of a total 104 tested), as of the facility’s most recent testing this week on Sept. 20 and 21.

“We appreciate the community’s understanding about the continued policy to restrict visitors into the community,” said Drucks.