Members of the Kahaiali’i family on Maui flew to Honolulu last night, seeking legal council for an October 20th incident involving the alleged desecration of their ancestral heiau in Ukumehame. 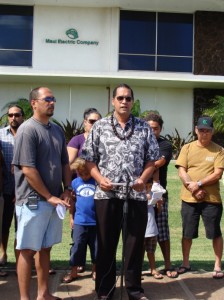 Kamaunu Kahaiali'i (right) and Kealii Blaisdell (left), backed by family members, stand in front of the Maui Electric Building in Wailuku following a dispute with the company over alleged heiau desecration. Photo by Wendy Osher.

The family says contractors with Maui Electric Company parked cars on the temple site, left litter and defecated on their sacred land.

The alleged incident was observed while family members were shooting a documentary on kuleana lands, the rights of which have been the subject of a long-standing dispute.

MECO issued a public apology in the Maui News this morning expressing regret for the emotional and spiritual pain caused.

Family members this morning said they have not seen the apology and therefore do not accept it.

The published MECO letter states, that a private apology was offered. Company President Ed Reinhardt said he was, “shocked and ashamed” by the incident and had hopes of earning the family trust going forward.

The four mainland workers with PAR Contracting were relieved of their duties on Maui that involved maintenance work on transmission lines.

Electric company officials say they hope to do a better job of educating workers in the future in part by providing additional cultural briefings.

Keanae: Life in the Loi