The State Department of Transportation today issued a statement on the status of an Environmental Impact Statement that was being prepared for the now suspended Hawaii Superferry operation.

DOT Director Brennon Morioka said the agency has since instructed the firm Belt Collins, to cease all work on the Act 2 EIS.The DOT will instead, refocus its efforts towards completing a Chapter 343 environmental review of harbor ferry improvements.

Morioka said the completion of the ferry EIS will likely take an additional four to six months because of the recent Supreme Court decision.Under the ruling Act 2 was invalidated.  The law that had allowed the Superferry to operate while an EIS was being conducted, was deemed unconstitutional.

“The Lingle administration, with the support of the legislature, has worked tirelessly to foster a commercially viable alternative form of sea-based transportation between the islands.Since the ferry’s operation in 2007, it has gained widespread support by the community and Hawaii’s small businesses through its ridership.At the same time, the Hawaii Superferry has not demonstrated any of the environmental impacts predicted by ferry opponents, concerns the State takes very seriously.

To provide some background, the 2005 exemptions for harbor ferry improvements were consistent with years of practice and procedure within the state Department of Transportation (DOT) and by many previous administrations. It was not until the Hawai`i Supreme Court’s decision in August 2007 that DOT was required to assess the potential secondary impacts of privately owned vessels operating outside of the state’s harbors in the open ocean between the islands.Responsive to the Hawaii Supreme Court’s 2007 decision and Act 2, the DOT hired Belt Collins, Hawaii, to prepare a Statewide Environmental Impact Statement, which was scheduled for completion in May 2009.

Given the Hawaii Supreme Court 2009 decision, No. 29035, the DOT has instructed Belt Collins, Hawaii, to cease all work on the Act 2 EIS.  DOT will now refocus its efforts towards completing a Chapter 343 environmental review of harbor ferry improvements, making maximum use of existing data.It is projected the Supreme Court’s decision invalidating Act 2 will necessarily extend the completion of the ferry EIS document by four to six months.

There are many legal and financial issues currently being reviewed by the state, and we are not in the position to discuss them publicly at this time.We will provide more information as it becomes available.” 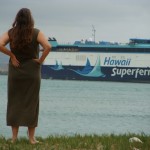