A survey of Maui’s Ko’olau Forest Reserve has documented new populations of several plant species thought to be near extinction, and the discovery of what scientists believe is a new plant species found only in East Maui.

The Nature Conservancy announced the findings today.Â  The agency’s invasive plant specialist on Maui, Pat Bily said, “We set out to document rare plants in areas not known to have much human presence and where we had a lack of biotic inventory – and the discoveries were pretty amazing.” 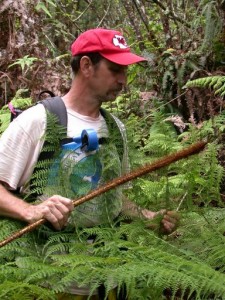 The survey, which took place over a four-month period, was conducted in cooperation with the State Division of Forestry and Wildlife (DOFAW).

Field crews from both the East Maui Watershed Partnership (EWMP) and the Maui Invasive Species Committee assisted in the survey, which is part of an ongoing partnership effort to map the biological richness of the 100,000-acre East Maui watershed – home to 74 rare plant species and the greatest concentration of endangered forest birds in the U.S. The Conservancy’s 5,230-acre Waikamoi Preserve is located near the headwaters of the watershed. 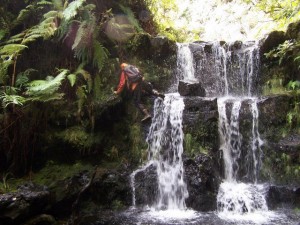 “Our primary objective was to establish a biological baseline and get a good ballpark idea of how many rare species exist above protected areas (like Waikamoi Preserve and fenced units managed by the EMWP crew), especially those extremely rare taxa only found here in East Maui with a very limited range,” Bily said.

Among the most important finds for the team were two species related to the fragrant Hawaiian mokihana.Â About 10 trees of the endangered Melicope ovalis were counted. Â “Melicope ovalis is only found in East Maui,” Bily said. Â “We had a hunch we’d see some, but we definitely found more than we expected.” 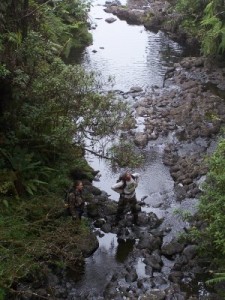 The researchers also came upon an undetermined species, presently dubbed Melicope sp, which they believe represents a new species. “Botanists had been seeing this around Maui for years, but nobody’s been able to find any fruit,” Bily said. Fruit or seed capsules are essential for the confident identification of species.

In this case, four individuals of this species were found – and among them, a single mature seed capsule was collected. The National Tropical Botanical Garden and the Smithsonian Institution are currently verifying whether the capsule is a new species.

New ranges and populations were found for some of East Maui’s rarest plant taxa, including five lobeliad species found only in East Maui and three rare species that scientists had worried were on the brink of extinction: Christella boydiae, Clermontia samuelii subsp. hanaensis, and Cyanea mceldowneyi. 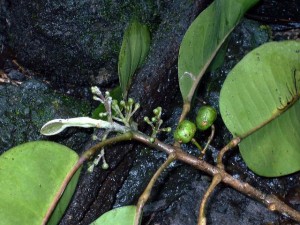 The researchers found 123 plants clustered in 11 small colonies of the rare fern Christella boydiae, also known as Kupukupu makali’i. “Our findings increased the known population by 50%, signifying a huge expansion of range for that plant,” Bily said. According to Hank Oppenheimer of the Plant Extinction Prevention Program, with the new populations discovered in secure habitat, the three are no longer considered priority high-risk species.

The survey stretched across 24 miles and four separate large drainage areas of the State’s Ko’olau Forest Reserve: Pi’ina’au, Wailuanui, Wailuaiki and Kopili’ula, at elevations ranging from 2,700 to 4,400 feet.Â  Not surprisingly, rare and endangered plants were often found in higher-elevation protected areas less accessible to invasive animals.Â  An added measure of protection involved the construction of a contour fence which extends from Waikamoi Preserve across the upper Forest Reserve connecting to DOFAW’s fence system at the Hanawi Natural Area Reserve.

The EMWP field crew, assisted by TNC, DOFAW and National Park Service staff, built and maintains the fences, and assists with management. The partnership “had the intuitive sense to build that fence before the pigs got too far up,” Bily said. “They get the gold medal for all the rare plants that we found.”

The East Maui Watershed Partnership was formed in 1991. Its members include the State Department of Land and Natural Resources’ Division of Forestry and Wildlife, Haleakala National Park, The Nature Conservancy, East Maui Irrigation Company, HaleakalÄ Ranch, Hana Ranch and the County of Maui.

The partnership’s goal is the long-term protection of the East Maui watershed by pooling expertise and resources to plan, fund and implement an active watershed management program.