Proposed improvements to the Hana Highway will be discussed at a meeting hosted by the state Department of Transportation this week. 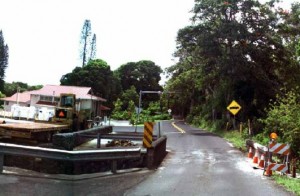 The existing one-lane culvert bridge on Hana Highway near the Uakea Road intersection will be widened to two lanes under the proposed DOT plan. The proposed changes are expected to allow for improved response times of large emergency vehicles at the neighboring Hana Fire Station and the Hana Police Station. Photo courtesy, Hawaii DOT.

The project proposes to widen lanes, construct paved shoulders and install guardrails at a culvert bridge near the Uakea Road intersection.

The one lane bridge, originally constructed in 1915, will be widened to two lanes to help facilitate emergency vehicle movement and response times from the neighboring Hana fire and police stations.Â  The improvements are also expected to lower the risk of vehicle collisions on the narrow section of road.

State officials say aesthetic and historical features of the existing bridge will be maintained in the proposed project design.

The meeting is set for this Wednesday, June 10 at 6 p.m. at the Hana Community Center.

TENNIS ENTHUSIASTS SERVING IT UP IN KULA