Maui musician Willie K will be the featured entertainer at a free performance to raise awareness of Maui’s voyaging canoe the Mo’okiha o Pi’ilani  The performance begins at 7 p.m. Monday at the Lahaina Cannery Mall. 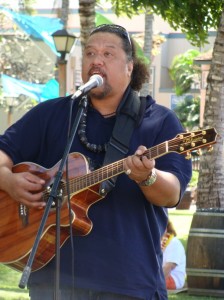 Willie K. plays a free night of music at to help raise funds for the Moâ€™okiha o Piâ€™ilani. Photo by Wendy Osher Â© 2009.

Willie K, the president of the non-profit Hui o Wa’a Kaulua, is working to expand membership and support for the society as it moves towards completion of the 62-foot double hulled canoe.

“We’re trying to expand our membership and share what we’re doing with the public,” said Willie Kahaiali’i – better known as Willie K.  “This is Maui’s canoe. This is for the whole community. We want to share the Mo’okiha O Pi’ilani with everyone. When it hits the water, we want everyone to know what’s going on.”

The society is dedicated to promoting the Hawaiian culture by offering youth the opportunity to learn about the construction and sailing of authentic Hawaiian sailing canoes, utilizing traditional methods.

Construction on the vessel began in the mid 1990’s and is nearing completion.  It is among a family of canoes being maintained by the organization, which operates out of a canoe hale at Kamehameha Iki Park.

The following video documents the efforts of Hui o Wa’a Kaulua.  It was produced by our news crews in August of 2008.  (Produced by Wendy Osher & Frank Pulaski III)