The county’s planning committee will begin deliberations on the General Plan.Â  The first meeting is set for August 4th in the Council Chambers, with additional meetings planned on Molokai, Hana and Lanai.Â  The general plan is the county’s primary planning tool and statement of policies. 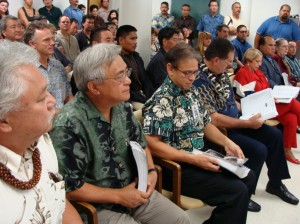 Deliberations will begin with the Countywide Policy Plan, the first major component of the new Maui County General Plan.

“As the top layer of the General Plan, the Countywide Policy Plan provides not only land use objectives, but also establishes the County’s goals and values for all areas of life, including quality of life, culture, the environment and the economy,” said Planning Committee Chair Sol P. Kaho’ohalahala.

Details for the upcoming meetings are as follows: