Hurricane Felicia strengthened slightly on Friday afternoon, but is still forecast to weaken over the weekend.Â  At 5 p.m. HST on Friday, August 07, 2009, Hurricane Felicia was located about 1115 miles east of Hilo, Hawaii and was moving toward the west-northwest at near 14 mph. 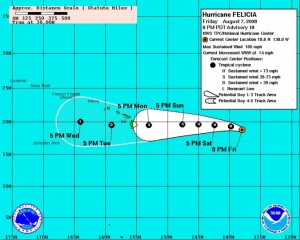 The National Weather Service forecasts a gradual turn toward the west on Saturday.

Felicia is a category two hurricane on the Saffir-Simpson scale.Â  This strengthening is forecast to be short-lived though, and weakening is expected during the next couple of days.

FORECAST DISCUSSION:Â  (Provided by Forecaster BEVEN with the NWS and National Hurricane Center)

Satellite imagery…including a TRMM overpass…indicate that Felicia has become better organized during the past several hours. The eye is more distinct…and the eye-wall is more symmetric with colder cloud tops.Â  Satellite intensity estimates are 102 KT from TAFB and 90 KT from SAB.Â  Based on this…the initial intensity is increased to 90 KT, and this could be a little conservative.Â  The hurricane remains in a light vertical wind shear environment with good cirrus outflow over the western semicircle and fair outflow elsewhere.

The initial motion is 295/12.Â  Water vapor imagery and large-scale model analyses suggest that the subtropical ridge is building north of Felicia…which should cause the hurricane to turn gradually westward during the next 24-36 hr.Â  After that…the models forecast Felicia to encounter increasing upper-level westerlies.Â  A break in the mid-level ridge east of the Hawaiian islands…and a weak mid-level anticyclone forming just southwest of the islands.

The models show this evolution blocking the westward motion of the Mid- and upper-level portions of Felicia…causing the storm to shear apart in about 48 hr. Â The weakening low-level circulation would then continue westward in the trade winds.Â  All model guidance agrees with this scenario…and the official forecast follows it…calling for Felicia to pass near the island of Hawaii between

72-96 hr.Â  The new forecast track is an update of the previous forecast and lies just south of the model consensus.Â  An alternative scenario is for Felicia to maintain some vertical integrity and be steered toward the west-southwest by the mid-level ridge near Hawaii.

Felicia is still moving over cooling sea surface temperatures…and should continue to do so for another 12-18 hr.Â  This should cause the hurricane to weaken…the recent intensification notwithstanding.Â  While the SSTS along the forecast increase starting in about 24 hr, the cyclone is likely to continue weakening due to the increased shear beginning in 36-48 hr.Â  All intensity guidance calls for weakening as Felicia approaches Hawaii…and the new intensity forecast follows the guidance in best agreement with the intensity consensus model.Â  If Felicia moves south of the forecast track…it would encounter warmer SSTS and less shear…which could allow it to remain stronger than forecast.Â  On the other hand…any motion north of the forecast track would steer the cyclone into strong shear north of Hawaii and hasten its demise.