There is a Tropical Storm Watch in effect for Maui, Molokai, Lanai, Kahoolawe, the Big Island, and waters surrounding Maui County and the Big Island of Hawaii.

There is also a Flash Flood Watch that will go into effect on Monday morning and run through Tuesday afternoon for Maui County and the Big Island.

When making decisions, do not focus on the exact forecast track. Track and intensity forecasts are subject to change. The effects of Tropical Storms can extend from from the center.

Hurricane Felicia is forecast to weaken and continue west toward Maui County and the Big Island over the next few days. The forecast track brings Felicia near or over those islands on Monday. Although the system is expected to weaken to a Tropical Storm as it reaches the islands, it will still be capable of producing torrential, flooding rains, very high surf, and damaging winds.

It is too early to provide exact values for wind, rainfall, and surf at specific locations.

People under the watch should begin preparing now. Listen for possible warnings and be ready to evacuate if necessary. Heed the advice of local officials.

Interests at ports, docks and marinas should prepare now. If you live on a boat, begin to safely secure your craft and make plans to leave it for adequate land based shelter. Listen for possible warnings.

Small craft should return to port or seek safe harbor.

The next update will be issued at around midnight HST or sooner if conditions warrant. 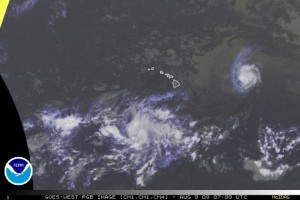 Preparations for the possibility of damaging winds should be make now, before conditions deteriorate. Keep informed while listening for possible warnings.

Loose objects such as lumber, lawn furniture, garbage cans, and other items should be secured or stored indoors. People in flood prone areas need to prepare now for the possibility of torrential rains associated with Felicia.

On the Big Island, the probability of tropical storm force winds at Hilo is about 26 percent; about 22 percent at Kailua-Kona and about 15 percent at South Point.

For Maui County, the probability of Tropical Storm Force winds at Kahului is about 23 percent ; and about 21 percent at both Lanai City and Kaunakakai.

As Felicia moves closer, the threat for sustained high winds is likely to increase. The latest forecast is for Tropical Storm Force winds to begin late in the day Monday, continuing Monday night, and gradually subsiding on Tuesday. Stronger gusts can be expected over and near mountainous terrain.

Rough and dangerous surf is expected to start to increase ahead of the storm on Sunday for East Facing shores of Maui County and the Big Island. Surf heightss are expected to continue building, possibly reaching 10 to 15 feet for east facing shores later Monday. Note that surf heights will be highly dependent on the exact track and intensity of Felicia.

A Flash Flood Watch is in effect from Monday morning through Tuesday afternoon. Heavy rain bands associated with Felicia are expected to begin affecting the Big Island and Maui County early on Monday, with rain and squalls increasing during the day.

Boat owners should begin taking protective action and determine the best strategy for securing their craft.

The chance for Tropical Storm conditions at this time is about 22 percent over teh coastal waters around Maui and the Big Island.

As Hurricane Felicia moves closer, the threat of sustained high winds is likely to increase. The latest forecast is for tropical storm force winds to overspread the coastal waters from East to West, starting Monday afternoon and continuing through Tuesday Morning.