At 5 p.m. HST, a Tropica Storm Watch was issued for the Big Island of Hawaii and for all of Maui County, which includes the islands of Maui, Kahoolawe, Lanai and Molokai. 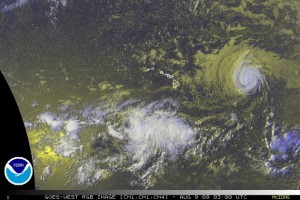 The system was located at 760 miles East of Hilo Hawaii and about 940 miles east of Honolulu Hawaii at about 5 p.m. Saturday, August 8, 2009. Felicia is moving toward the west near 15 mph and this general motion is expected to be near or over the Hawaiian islands by Monday.

Maximum sustained winds are near 85 mph with higher gusts. Felicia is a category 1 hurricane on the Saffir-Simpson Scale. Slow weakening is forecast during the next couple of days, and Felicia could become a Tropical Storm within the next 24 hours.

Interests in the remainder of the state of Hawaii, including the islands of Oahu, Kauai, and Niihau, should closely monitor the progress of Felicia. A Tropical Storm watch should be required for these areas later tonight.