FELICIA LOCAL STATEMENT: WHERE & WHEN TO EXPECT RAIN 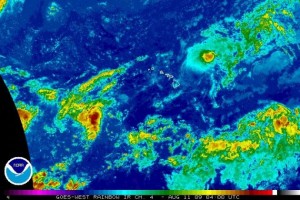 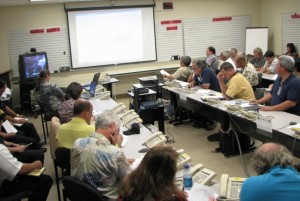 State and County officials are briefed on the track of Felicia at a briefing on Sunday at the County Emergency Operating Center. Photo Courtesy: County of Maui.

At 5 pm HST, the center of tropical storm Felicia was located near latitude 20.9 north…longitude 152.1 west…or about 210 miles east-northeast of Hilo, Hawaii. The system is moving west or 270 degrees at 10 mph. Maximum sustained winds are near 40 mph.

Even if Felicia weakens to a depression…it could still produce pockets of heavy rainfall and flash flooding…as well as localized strong gusty winds. The strongest winds can be expected near higher terrain which can accelerate winds down slope.

Secure loose outdoor objects that could be blown around by strong winds…or bring them indoors this evening. Have batteries and flashlights on hand in case the power fails.

Interests at ports…docks…and marinas should prepare now. If you live on a boat…begin to safely secure your craft and make plans to leave it for adequate land based shelter. Listen for possible warnings.

Small craft should return to port or seek safe harbor.