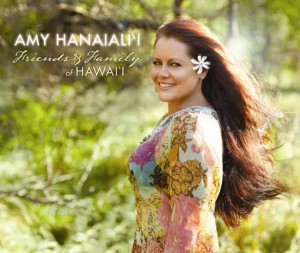 HÄnaiali’i hosted an intimate premiere party in Downtown, Honolulu last week with 200 people in attendance. Sidney Quintal, the City and County of Honolulu’s Department of Enterprise Services Director read a proclamation on behalf of Mayor Mufi Hannemann, lauding HÄnaiali’i’s versatility and talent on the new album. Hannemann went on to proclaim August 17, 2009 as Amy HÄnaiali’i Day in the City and County of Honolulu.

The album includes original duets with Hawaiian and Island music icons. One of the star features is a Van Morrison tune entitled Have I Told You Lately? HÄnaiali’i sings a duet of the song with music legend Willie Nelson, who calls Maui home for a part of the year. Additionally, she sings duets with some of Hawai’i’s most popular artists including Keali’i Reichel, Robert Cazimero, John Cruz, Henry Kapono, Nathan Aweau, FIJI, Sean Na’auao, Kawika Kahiapo and Darren Benitez. Hanaiali’i is joined on other compositions by Hawaiian Legends Palani Vaughan, Martin Pahinui, Aaron Mahi, George Ku’o, and Dennis Kamakahi.

Hanaiali’I joins her multi-talented brother Eric Gilliom to sing with her – James Taylor’s Shower the People. She also includes Hawai’i’s newest stars on the CD: Rebel Souljahz and Kaumaka’iwa Kanaka’ole. Â HÄnaiali’i sings in both English and Hawaiian – and in the style of each of her talented guests.

“I am extremely honored to be able to work with people I’ve looked up to my entire career and others who I have grown with in this industry. This album is a true reflection of Hawai’i’s talent and my appreciation and love for music of all styles,” HÄnaiali’i said.

“Hawai’i is a unique and special place where calling anyone aunty or uncle is a daily norm, but it is the true essence of how we live in Hawai’i, treating everyone as friends and family.”

CD packaging was created by the Mountain Apple Company.