Firefighters continue to maintain their posture in fighting the 8,000 acre Molokai fire that has been burning for six days.Â  County Civil Defense Administrator Gen Iinuma tells us crews have been doing an exceptional job of maintaining the perimeter of the fire, but continue to monitor flare ups and conduct fire suppression efforts in the upper elevations.Â  The National Weather service has issued a fire weather watch in effect from Friday morning through Friday afternoon.Â  Breezy and gusty trades combined with warm and dry weather will create the potential for critical fire weather conditions across leeward areas.Â  The emergency command plans to reassess operations later this evening to determine staffing projections as the containment improves.Â  Containment remained at between 70 and 80% today.

Progress has been made on the Molokai fire that remains at between 70 and 80% containment.Â  The six-day old fire has burned 8,000 acres since it started on Saturday.Â  Four-hundred acres was scorched in the Molokai State Forest Reserve and 100 acres was burned in the Nature Conservancy where endangered species are grown.Â  Most of the burned area affected on the conservancy land was the pines on the perimeter, which are non-native plants. 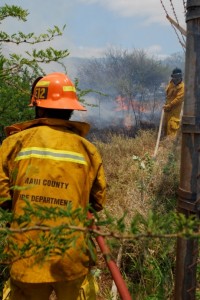 Crews have discontinued their use of the Chinook helicopters from the National Guard and are back to using local air assets to battle the blaze at the upper elevations.Â  The focus of efforts remains monitoring of the perimeter and battling the fire in the upper elevations where the fire has proven to be persistent.

Overnight there was a flare up reported near the plumeria farm in Kalamaula, and a similar flare up in the ‘Onini Gulch on the Eastern flank of the fire.Â  While the Kalamaula fire was knocked out over night, firefighters had planned to focus on the ‘Onini flare up as their first point of contact this morning.

Civil Defense Administrator Gen Iinuma tells us conditions are better today with less smoke, and less visible fire activity.Â  Iinuma said the Red Flag Warning was canceled for today because of more moisture in the air and cloud cover during the morning.Â  However, that cloud cover is expected to lift later in the day and breezy trade winds are expected to continue.

Iinuma called the firefighter’s efforts to date remarkable, and credited them with their skill and tenaciousness in protecting life and property in the populated areas of Molokai.