Residents of Molokai will have a chance to weigh in tonight (Wednesday, September 30, 2009) on the Mayor’s Proposed budget for the 2010-2011 fiscal year. The meeting begins at 5 p.m. at the Mitchell Pauole Community Center. 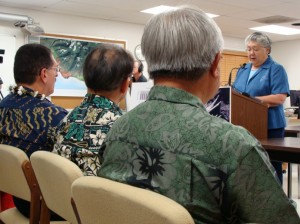 Maui Mayor Charmaine Tavares unveiled her version of the Budget in March, presenting the document to members of the Maui County Council. File Photo by Wendy Osher.

“These meetings give the public a chance to let us know what they feel is important for their area,” Mayor Tavares said. “We value their insights on what is most needed for the benefit of the community, and it is essential that my Administration receives feedback directly from our citizens.”

Meetings were held previously in South Maui, Paia/Haiku, Central Maui, Lanai, Lahaina, Pukalani and Hana. Meeting locations vary to accommodate residents throughout the County’s three islands; however, anyone can attend.

Citizens with an interest in the County budget are encouraged to attend a meeting in their local area and offer testimony as individuals or on behalf of an organization. Both written and verbal testimonies will be accepted. The County Charter requires that the Mayor and her Administration submit to the County Council a proposed operating budget in March of each year.

Budget Director Fred Pablo will present the projects and initiatives of the Administration specific to that community. Input from the community meetings will be taken into consideration when the fiscal year 2010-2011 budget is constructed, including priorities for programs and capital projects.

Each session will be preceded by presentations on the “Circuit Breaker” real property tax credit.Â  This information session is open to all residents who may qualify for this tax credit. Applications and instructions will be available for all interested parties in attendance.

Additionally, the program office of the Community Development Block Grant (CDBG) will conduct public hearings preceding the Mayor’s budget community meetings in East Maui, Molokai, Central Maui and Lanai. CDBG will gather views and comments from interested persons who wish to participate in the preparation of the County’s proposed Annual Action Plan for the 2010-2011 fiscal year relating to the County’s grant application for approximately $2 million from the U.S. Department of Housing and Urban Development. The Community Development Block Grant is a federal program created by Title I of the Housing and Community Development Act of 1974 (Public Law 93-383).Â  CDBG funds received will be utilized for housing and community development needs primarily benefiting low and moderate income persons.

(Posted by Wendy Osher, information provided by the County of Maui)