Maui police have launched an attempted murder investigation following a report of a homeless man being set on fire while he was sleeping.

The incident was reported early this morning in Paia.Â  The 27-year-old male victim went to the Shell Station where he reported the incident.

He was transported to the Maui Memorial Medical Center where he was treated for second degree burns to 50% of his body.

Police are looking for a local homeless male who is considered a person of interest.Â  An investigation is ongoing. 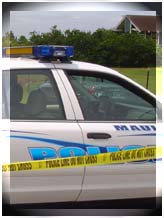