A High Surf Warning remains in effect for the north and west facing shores of Niihau, Kauai, Oahu, Molokai and Maui until 6 p.m. on Wednesday. 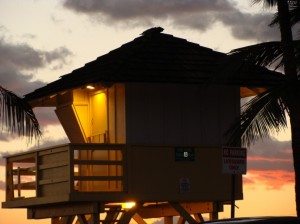 The first day of the advisory brought 45-foot surf to the north shore of Maui.Â  Three jet skis were lost Monday in the surf at Peahi where big-wave riders braved the 40 foot surf at the popular JAWS surf break.

Both Baldwin and Hookipa Beach Parks on Maui remained closed all day Tuesday.Â  Surf at Baldwin on Monday washed large amounts of sand into the park’s pavilions and forced the relocation of the lifeguard tower inland to prevent damage to the structure from the surf.