On the First Day of Christmas, the Wailuku Community Association got a Santa Claus in a Banyan Tree.

The Santa statue had gone missing for a full week, but was returned to its perch at the Wailuku Banyan Tree Park over the holiday weekend. 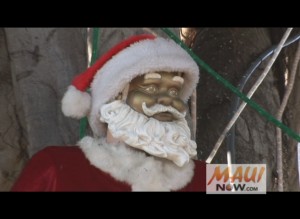 The statue is situated at the corner of the busy Vineyard-North Market Street intersection where motorists slow to a four way stopâ€”drawing the attention of passerbyâ€™s during their holiday commute.

When the smiling Santa was stolen on December 18, pleas were published across the state.Â  Despite signs posted on the tree reminding visitors to leave the Santa for the children, the banyan stood bare for seven straight nights.

Until, the Santa statue mysteriously made his way back to the shady spot on Christmas morning.Â  The only thing noticeably missing was his black belt. Â Banyan Tree Santa was originally placed at the park by the Wailuku Community Association.