The American Red Cross today announced the release an additional $9 million for earthquake relief in Haiti, bringing its total commitment so far to $10 million.Â  The agency says as many as three million people may be affected in varying degrees with relief efforts focusing on priority needs of food, water, temporary shelter, and medical services. 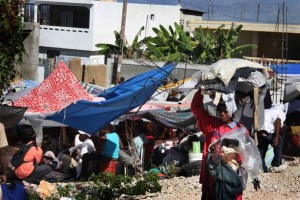 Here in Hawaii, donors can call in donations to the Hawaii Red Cross at 739-8109, go on-line at www.hawaiiredcross.org or mail donation to American Red Cross, Hawaii State Chapter, 4155 Diamond Head Road, Honolulu, HIÂ  96816. If you would like to donate specifically to the Haiti relief effort, please indicate so on your check or when you call, and your donor intent will be honored.

Aside from traditional mail in monetary donations, the Red Cross is also receiving money through a mobile fundraising campaign in which donors can donate $10 by text-ing the word Haiti to 90999 (donation would be reflected on cell phone bill). The mobile giving effort raised more than $3 million by Thursday morning, and all money raised goes to support Red Cross relief efforts in Haiti.

In addition to the thousands of local Red Cross volunteers already providing aid to their fellow Haitians, American Red Cross Disaster management specialists are scheduled to arrive today from the United States, Peru and Mexico.

As soon as airports begin accepting relief shipments, tarps, hygiene items and cooking sets for approximately 5,000 families will come from the Red Cross warehouse in Panama.

The American Red Cross is also helping the injured who may need blood.Â  More than 100 units of blood and blood products were shipped to the U.S. Naval Air Station in Jacksonville, Florida, and then on to Guantanamo Bay to help Haitian evacuees and patients.

The International Committee of the Red Cross (ICRC) has a plane full of mostly medical items on the way to Haiti from Geneva.Â  ICRC staff, including engineers, a surgeon and family linking specialists are expected to arrive in Port-au-Prince this morning.Â  Other Red Cross partners have deployed a mobile hospital, medical teams, and 40 staff to help with sheltering, providing water, sanitation, and telecommunications.

ICRC is helping reconnect separated families in Haiti through a special web site which enables people in Haiti and outside the country to search for and register the names of relatives missing since the earthquake.Â  In the first twenty-four hours, more than 6,000 people have been registered.