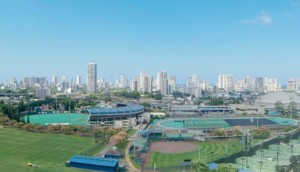 Saturday’s University of Hawai‘i-BYU men’s volleyball match that was supposed to be played on Maui on Saturday, has been rescheduled for Monday at the Stan Sheriff Center on Oahu. The game was among the many events and activities that were affected by the tsunami warning that was finally lifted after 13 hours. Photo of the Blaisdell courtesy University of Hawaii.

Saturday’s University of Hawai‘i-BYU men’s volleyball match has been rescheduled for Monday at the Stan Sheriff Center. First serve is 6:00 p.m.   The game, originally scheduled for 5:00 p.m. at a sold-out War Memorial Gym in Maui, was postponed due to the tsunami warning issued on the Hawaiian Islands.   The match will instead move to the Stan Sheriff Center, where UH defeated BYU in five sets on Friday. All seats are general admission and prices are $8 adults, $7 senior citizens, and $3 students (ages 4-18 and all UH system students). Tickets are available online at HawaiiAthletics.com and at Rainbowtique outlets. On Monday, tickets will also be available at the Stan Sheriff Center Box Office and via phone at 944-2697.   All customers who purchased the Maui game tickets online or by phone via credit card, will automatically have their credit cards refunded to them by March 5, 2010.   For those who purchased tickets in person from the Stan Sheriff Center or any Rainbowtique stores, you must return the game tickets to the Stan Sheriff Center Box Office to receive your refund. Deadline to receive your refund is Friday March 12, 2010 at 4:00 p.m.   For those who purchased tickets on Maui through the Pacific Radio Group, please return the game tickets for a refund to their offices beginning Tuesday, March 2. They are open Monday through Friday from 8:00 a.m. – 5:00 p.m. Deadline to receive your refund is Friday, March 12, 2010.

Other UH events were either postponed or cancelled.

The baseball game versus Oregon will be made up as part of a double-header on Sunday beginning at 1:00 p.m. The rescheduled game will start 30 minutes after Sunday’s regularly scheduled game. Fans with tickets to Sunday’s regularly scheduled game will have rights to their seats for the 1:00 p.m. game but must move to unoccupied seats for the second game. Fans with tickets to Saturday’s game are welcome to attend both games, however, they must sit in unoccupied seats for the first game and move to their reserved seats for the second game. The stadium will not be cleared between games.   The women’s soccer team’s six-on-six tournament also scheduled for today at the UH practice fields is cancelled.   This posting will be updated with further information as it becomes available.

Signs Posted at Nearshore Waters in Kahului, Paukukalo and Napili

Start up of Pump Stations Cause Sewage Spills