Walgreens opens its second full-service store on Maui this weekend.  The 14,820-square-foot Kahului location opens just six months after the grand opening of the Lahaina store in October.  There are also three pharmacy-only locations on Maui (two in Wailuku and one in Lahaina).  The Kahului store brings to six the total number of full-service locations in Hawaii. 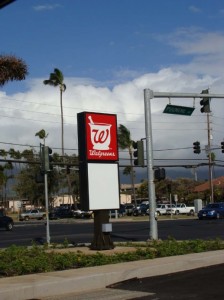 As part of Sunday’s grand opening festivities, Walgreens will present a $5,000 donation to the American Diabetes Association of Hawaii.  The store opens at 8:30 a.m. with a blessing conducted by Kahu Kalani Wong, entertainment by recording artist Leokane Pryor, and hula performed by Hula Halau O Keola Ali`iokekai.  There will also be a live radio broadcast from Pacific Radio Group’s KPOA 93.5 FM beginning at noon.  The festivities will continue throughout the day with neighboring businesses and vendors offering free product samples and demonstrations.

“We’re taking another step toward our goal of having a full network of drugstores to serve residents and visitors of the Islands,” said Dana Psomas, Walgreens Hawai‘i district manager, noting that Walgreens plans to eventually open 25 to 30 stores in Hawai‘i. “This location includes a double-lane drive-thru for the pharmacy, our first on Maui. This is just another way we can provide more convenience and value to Hawai‘i residents.”

The Kahului Walgreens is located at the corner of Kamehameha and Puunene Avenues.  Hours of operation will be from 7 a.m. to midnight seven days a week.  The store’s pharmacy will be open from 8 a.m. to 10 p.m. Mondays through Fridays, from 9 a.m. to 6 p.m. Saturdays and from 10 a.m. to 6 p.m. Sundays.

The new store will have the following features and services:

VIDEO: Uhane Pohaku, The Spirit of the Stone