State Representative Mele Carroll of Maui raised concerns over plans for a proposed 400 MW wind farm on the island of Lanai, after visiting the site over the weekend.  While voicing support for renewable energy, Carroll questioned the logic in generating alternative energy at the risk of protecting natural resources, and questioned how the project would benefit island residents who live on Lanai. 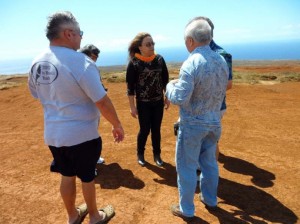 “There are a number of important cultural sites here, including heiaus, petroglyphs and `iwi, and the remnants of an actual women’s prison built in the coastal region of Ka`a in the 1800s,” said Carroll.  “There is a huge amount of history in this land, and I feel the community connected to that history should have a voice in the discussion,” said Carroll.

Overgrazing has also been blamed for erosion with sections of land having eroded 10 feet since 1900, according to officials with the Lanai Cultural Center.

The project is proposed by majority landowner Castle & Cooke, a company that plans to transport wind energy generated on Lanai to the island of Oahu via underwater cables.  The site is situated at the Ka’a Ahupua’a, in the Keahiakawelo-Kanepu’u region, also known colloquially as “The Garden of the Gods,” where wind gusts have been recorded in excess of 50 miles per hour.

In March of 2009, an agreement was announced between Governor Lind Lingle, Castle & Cooke, First Wind Hawaii and Hawaiian Electric Company that was aimed at increasing the state’s energy independence by adding clean energy to the Oahu Grid.

At the time, officials from Castle & Cooke anticipated the project would result in the creation of green jobs and economic opportunities. 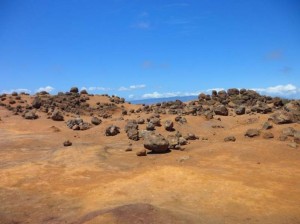 In light of her concerns, Carroll said, “The recent progress our state has made in being less oil-dependent is vital to Hawaii’s future.”

Carroll attended the site visit on Saturday, April 10, 2010 along with House Sepaker Calvin Say, Representative Angus McKelvey of Maui, as well as members of the Lanai Cultural Center and Lanaians for Sustainable Growth.

“Our trip to Lanai was primarily a matter of understanding the concerns of the citizens there,” said Carroll.  “They are the ones who will be affected most by the windfarm, so it is only fair that they be consulted,” she said.

Carroll and McKelvey joined in introducing House Bill 2971 on January 27, 2010, that sought consultation from citizens of Lanai.  The bill also outlined requirements for the applicant to meet with community stakeholder groups to negotiate a community benefits agreement. On February 12, the item passed second reading with amendments and was referred to the Finance committee.

Rep. McKelvey noted that another option for alternative energy could involve using the land to construct algal ponds to harvest for bio-fuels.