The Budget and Finance Committee today heard a proposal that adjusts the fare for passes on the Maui Bus and maintains the free service for riders that utilize the MEO bus. 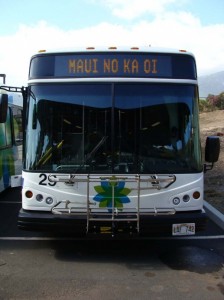 The proposal calls for a new $20 per month fare for passengers who use the Loop and Villager routes.  Currently, there is no charge for that service.

Under the proposal the bus pass for all General Boarding routes would increase $10 from the current $35 rate to $45 instead.

There would be no change to the $30 rate currently charged for seniors and students for all routes.

As for the MEO transportation services, there would be no fee for services.  This differs from the Mayor’s proposal which had called for a $1 fee and a proposed reduction in funding.

“In order for us to be viable in our transportation area, it would be good to have passengers pay for services; but in light of all the public testimony that we had listened to throughout the community, as well as in these chambers, a lot of people testified that paying x-amount of dollars would be a hardship.  I feel what is being proposed to you this morning is a viable plan to address most of the questions we had going throughout the community,” said budget chair Joe Pontanilla.

“This is something that staff and I worked all weekend to come up with ideas in regards to how we are going to provide transportation to the people of Maui,” Pontanilla said.

“We had gone through the numbers and basically what we are doing is reducing $600,000 as proposed by the administration regarding providing transportation,” said Pontanilla.

Council member Gladys Baisa, who served for many years as the director of MEO, consented to the proposal saying, “The bulk of the youth and the bulk of the seniors ride on the MEO buses, and they would not be paying.  And that was the saving grace for me with this proposal.”

“This would be a big break for the people who really need it—and that would be lots of our seniors and most of the kids who ride Youth Trans.  The others, of course we would like to see them lower, but at some point, we can only cut so much,” said Baisa.

Because there was no charge on social service transportation, Baisa said, “I think I can live with the rest.”

Council member Michael Victorino asked for clarification of who is eligible for the social service programs offered by MEO, specifically the Rural Bus program saying, “I don’t mind the $45 for all routes, but the other groups I think are a little bit more than what we should be charging.”

He expressed concern over the large number of Central Maui residents who reside in public housing and fall in the 60-80% income range.  “I don’t want them to be lost in the shuffle…for them that was probably their means (of transportation),” said Victorino.

While there is no specific criteria for enrollment or utilization of MEO’s Rural Bus service, Baisa said, “Unless we want to get into income eligibility determination… we’re just going to operate on faith that people will not take advantage.  The Rural shuttle service was essentially designed for people who cannot drive and need special assistance… It’s a different kind of service than pulling up to a bus stop and everybody jumping off on,” said Baisa.

Victorino responded saying, “I really want it clear, so that the public understands that there is an alternative instead of paying $20, if they cannot (make that payment).”

For those that continue to use the Maui Bus, Budget chair Pontanilla said, “For a person jumping on the bus to do shopping, it’s going to cost $1 each way.  So at the most, if you shop once a week, it will be $2.”