Lanai residential refuse customers will receive a credit of $27 on their June/July refuse collection statement for a three-month disruption of service. Refuse collection was disrupted from December 2009 to February 2010 when the island’s only refuse truck experienced mechanical problems. 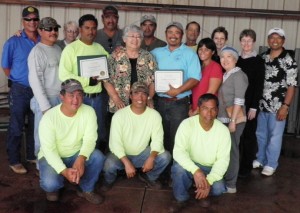 In order to accommodate the narrow streets of Lanai, the refuse truck is smaller in size than most refuse trucks, and is the only one of its kind in the County’s fleet. It was shipped to Maui for repairs and could not be temporarily replaced during the three-month service disruption.

Lanai residents can expect to receive the bill reflecting the credit adjustment in mid- to late June, 2010 after the Maui County Council approves rates and fees for Fiscal Year 2011, which begins July 1, 2010.

Each of the volunteers was presented with a certificate of recognition by Mayor Tavares during the mahalo BBQ luncheon held at the County’s Highway Division baseyard in Lanai City.

“For months these outstanding Lanai volunteers assisted senior citizens, the disabled and others unable to remove their own trash,” said Mayor Charmaine Tavares. “In typical Lanai fashion, they immediately stepped up to help without hesitation. Helping their community comes naturally for these volunteers and we’re very grateful for their dedication during such a challenging time.”

Mayor Tavares also recognized staff executive assistant Darlene Endrina, who serves as a liaison from the Mayor’s Office to the Lanai community. “Darlene was a key part in helping to connect volunteers with those who needed assistance. Her hard work made a difference in successfully coordinating a very valuable community service with the efforts of County employees and our Lanai volunteers,” said Tavares.