A historic decision was handed down on Tuesday that outlines in stream flow standards at 19 East Maui Streams. While water commission members saw it as a compromise, two of the main parties in the case have expressed concerns. 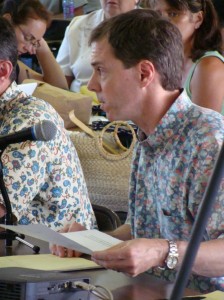 “We will keep trying our hardest to keep HC&S viable to enable this transition,” said General Manager Christopher Benjamin. Photo by Wendy Osher.

Attorneys for the Native Hawaiian Legal Corporation, representing taro farmers and subsistence water users, plan to file a request for a contested case hearing on the matter. Attorney Alan Murakami said it was difficult to account for the cultural suffering endured by loss of water, and urged members to refrain from issuing a ruling based on economic arguments.

On the other side of the issue, officials at Hawaiian Commercial and Sugar Company are fighting for continued use of water to sustain the sugar industry, which employs 800 people on Maui, and is recognized as the last sugar producer in the state.

HC&S General Manager Christopher Benjamin said the decision by the commission cannot be looked at in isolation. “It is yet another sizeable reduction in HC&S’ access to water, every day, that it needs to farm 35,000 acres of sugar cane on the Central Maui plain,” he said.

”An already challenging business has been made even more difficult,” said Benjamin who explained that yesterday’s decision is just one factor on top of a decision made by the commission in 2008 on five other East Maui streams, and a still-pending decision on Na Wai Eha that serves as a source of water for the Central, South and West Maui areas.

“That being said, we appreciate that the Commissioners recognized our higher irrigation needs in the summertime and responded to our proposal to compromise with seasonal releases of water,” said Benjamin.

Benjamin said the company supports the return of water to Makapipi Stream year-round for the Nahiku community. The stream was one of two that were granted annual restoration of water flow—the other was Hanawi. Out of the 19 streams considered under Tuesday’s decision, only six will benefit from varying levels of restoration. The others will keep flows at current status quo levels.

“HC&S has been making good progress in overcoming many challenges and has many reasons to be optimistic about our future, which will hopefully include biofuels,” said Benjamin. “We will keep trying our hardest to keep HC&S viable to enable this transition,” he said.