The Pan-STARRS telescope atop Haleakala officially began its science mission to survey the sky for killer asteroids.  The 1.8 meter telescope on Maui is the largest digital camera in the world with 1,400 megapixels.  The giant camera will take over 500 exposures each night and send about four terabytes of data (equivalent to what 1,000 DVDs can hold) to the Maui High Performance Computing Center for analysis.  It is designed to automatically search the skies for object that either move or change their brightness from one night to another. 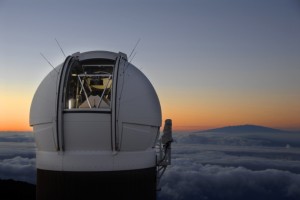 The PS1 Observatory on Haleakala, Maui just before sunrise. Mauna Kea on the island of Hawaii is in the background. Visible through the dome shutter are the calibration screen, the secondary mirror baffle, the truss and the primary mirror covers. The spikes on the outside of the dome are lightning rods. Photo Credit: Rob Ratkowski

In the next three years, PS1 is expected to discover about 100,000 asteroids and to determine if any of them are on a collision course with Earth. It will catalog five billion stars and 500 million galaxies.

Dr. Nick Kaiser, the head of the Pan-STARRS project said in a press release, “Although modest in size, this telescope is on the cutting edge of technology, it can image a patch of sky about 40 times the area of the full moon, much larger than any similar-sized telescope on Earth or in space.”

Designed and built by astronomers and engineers of the Pan-STARRS project at the University of Hawaii at Manoa, PS1 has now been turned over to the PS1 Science Consortium, a group of ten institutions, including UH Manoa, in the United States, Germany, United Kingdom and Taiwan that are funding the PS1 Science Mission.

PS1 will also be used to compile the most comprehensive digital map of the 75 percent of the universe visible from Hawaii.  PS1 is the experimental prototype for the larger PS4 telescope, that is proposed for Mauna Kea and designed to have four times the power of the PS1 telescope.

September USC vs Hawaii game will resume as planned