The environmental lawfirm, Earthjustice, filed a lawsuit today on behalf of two community groups on Maui challenging plans for a water treatment plant in Waiale.  The facility is proposed by Alexander & Baldwin, a company that has been fighting for water to sustain sugarcane crops under its Hawaiian Commercial & Sugar Company subsidiary. 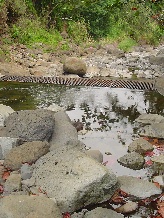 File photo of Iao Stream in West Maui where stream diversions and water rights have been the subject of Water Commission reviews. MauiNOW.com/W.Osher

The lawsuit, filed in Hawai’i state court on Maui, seeks to invalidate the environmental impact statement (EIS) for the proposed “Wai’ale Treatment Facility”.

According to a press release issued by Earthjustice, the water would be diverted from “stream flows that A&B has claimed is essential for its Hawaiian Commercial & Sugar (HC&S) plantation and instead use it for A&B’s land and water development plans.”

A&B Properties Vice President Grant Chun said he has not seen the lawsuit, but is familiar with the background of the claims.

Chun said the facility helps the community live up the goal of, “meeting mid-term water source needs sooner rather than later.”

“The whole point is, we are trying to be cooperative and work with local government to meet community needs,” said Chun.

Hui o Nä Wai ‘Ehä President John Duey disagrees with the intent saying, “Even as A&B threatens to shut down HC&S if its diversions are scaled back, it’s rushing ahead with big plans in the water business.”

“Our water resources are a public trust, not A&B’s property and profit source, and
the EIS must examine all aspects of this proposal in full public view,” said Duey.

Chun said the ideas for the water facility are not new.  “It’s been an alternative that has been out there for the community for some time now,” said Chun who said the subject had been discussed at length before the state Water Commission, and appeared in published studies as well.

The state Commission on Water Resource Management earlier this month, released a decision on water allocations at Nä Wai ‘Ehä, ordering amended interim flow standards of 10 mgd at Waihee Stream, 1.6 mgd at North Waiehu Stream, 0.9 mgd at South Waiehu Stream, and water to remain at current levels at both Iao and Waikapu Streams.

“The county approached us to address the idea of providing a public benefit with a water treatment facility to serve residents, farmers and local government,” said Chun.

Chun said the 9 mgd outlined in the design of the Waiale Treatment Facility, is not exclusively for the company.  “The idea the county is trying to pursue is to accommodate the needs of the community at large.”

County Communications Director Mahina Martin said the County of Maui has not been served with the lawsuit and will reserve comments for a future time.

Cause of Maalaea fire undetermined