On its 20th anniversary celebration, the County of Maui’s PALS program honored Maui Mayor Charmaine Tavares for her role in establishing the program.

“Mayor Tavares deserves a lot of credit for not only seeing the need that parents had 20 years ago, but actually creating this program to help parents,” said Karen “Aunty Ti” Deguilmo, PALS supervisor and Parks Recreation Leader. 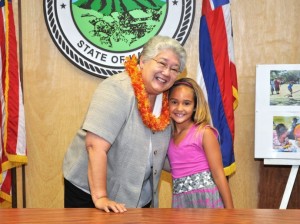 Mayor Charmaine Tavares gets a hug from PALS participant Jordynn Brown, 7, who gave the Mayor a lei to celebrate the 20th anniversary of PALS. 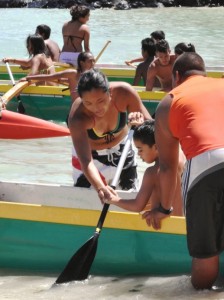 The PALS program was designed to assist parents who needed extended hours of child care to accommodate their work schedule, by providing qualified, trained staff to ensure a safe, fun environment that promoted learning along with play. The program served a total of 1,500 children this summer on the islands of Maui, Molokai and Lanai, under the supervision of 260 staff members and junior aides.

“This whole thing started because I met a single mom in the grocery store one night, and she shared with me how hard it was to work and take care of her child,” Mayor Tavares explained. “I realized that a lot of other working parents were facing similar challenges, and decided to create a program that the County could offer at a reasonable cost. It has been gratifying to see how successful PALS has been, and how many families have benefited from it,” said Tavares.

For more information on the PALS program, visit www.mauicounty.gov/recreation or call (808) 270-7403.