Introduction: Hi, my name is Ori Kopelman and I’m running for the office of Mayor.  Am I a businessman or an idealist?  The answer is both.  I was with a company in Silicon Valley that grew from 50 to 500 people in a period of six years.  I’ve also written a book since I’ve come to Maui called Creating Mauitopia, which some of you may have read.  It’s also available at mauitopia.org.  So the answer is, I am both an idealist and a businessman.  I’m planning if I get elected to Mayor, to run the county as a business–to increase its efficiency.  Now, of course, we do also have to address key issues such as growth and a lack of supply of water.  The other think is–I think if did what they loved to do for their work, everything would work out.  Again, my name is Ori Kopelman, and I’m running for Mayor. 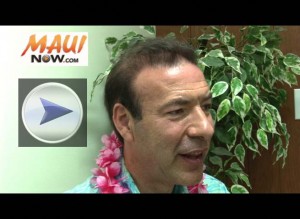 Development: What are your thoughts on smart growth and what will you do to prevent urban sprawl?  Answer: Smart growth is a concept that has been around for a couple of decades, and I believe in walkable towns where people congregate and close off the street–like at First Fridays in Wailuku Town–which is wonderful.  You know, thousands of people were in the street, and that’s really what I would like to promote.  I don’t know if we can do that in Paia or in Lahaina, but that’s part of what I’d like to see for Smart Growth.  Housing is also a key issue.  I’m glad to see that just recently, affordable housing was introduced in Kula.  I definitely think the community needs to have affordable housing because not everybody can afford the million dollar homes that many of the people on the mainland come to buy.

Permitting:  What are your thoughts on the county’s permitting process for B&Bs?  Should the approval for B&B’s rest in the hands of council members or the mayor’s appointed planning director?  Answer: That’s easy–the Mayor.  The Council is supposed to provide laws for the county.  One of the reasons that I’m running for Mayor is because everybody knows that all of government, and county government in particular, do everything slowly.  And, It’s a good idea if we can have the mayor decide about things like Bed and Breakfasts.  Now, there’s no question that shutting them down–which is something that people did to adhere to the law, and yet they’d been in existence for many years (and actually I know people who moved off the island as a result of that change)–I think that’s not right.  I think that the council can help by changing the laws to be more modern, more in the digital age, where everybody can in fact do a lot of work including run their own businesses from thier home, thanks to the computer and the internet.

Transient accommodations tax:  If elected to serve, what would you do to ensure that Maui keeps its share of the Transient Accommodations Tax?  Answer:  We definitely provide more than our share to the state government.  I think we need to negotiate with the state for our fair share.  I mean, we are sending over a lot of our tax dollars, and I think we should try to keep more of that here on Maui to allow us to develop our own infrastructure and continue to service the tourist industry, which is why they come here.

Water:  What are your plans to improve waste water treatment on Maui and your thoughts about injection wells?   Answer:  Injection wells are one of those heated topics.  In many ways, any kind of new technology is generally heated.  There are, I think 1.7 million injection wells in the United States.  So obviously this is something that has been proven, and can work.  Now, I know people are concerned in Maui about blooms for the algae in the ocean; and the studies have shown that that does not occur as a result of injection wells.  It’s not clear that that’s a result.  So, I’m in favor of using injection wells.  At the same time, our infrastructure for wastewater treatment, which will include additional pipes, needs to be put in.  Now, that may take years, and that’s why we have to be realistic and keep producing–we currently have, I believe, 18 injection wells in Maui County–and I think it’s a good idea to keep using them for now.  That’s a good way to get rid of our sewage.

Closing thoughts:  My phone number at my campaign headquarter is 877-4433.  My email is [email protected].  And my website, where you can find my booklet is http://www.mauitopia.org.  I hope you’ll vote for me for mayor.  Again, I plan to bring business efficiency to our county government and truly make Maui–since all of us that live here know it is the best place on Earth, but we also know about some of the problems we have like crime, and lack of water and wastewater treatment.  We know about some of those problems, which I hope to improve.  And then we can make it truly No Ka Oi.