Introduction:  Aloha, I am State Senator Shan Tsutsui and I’m running for re-election in the Senate 4th District–this includes Kahakuloa, runs through Waikapu, down to Kahului, and parts of Paia.  I think without a doubt, we all know that the economy has been very challenging for most, if not all of us over the last several years.  If re-elected, I would like to focus a lot of my attention on strengthening the economy, diversifying tourism, and really trying to put as many people back to work in higher paying and quality paying jobs.  Specifically, for the island of Maui, in addition to the economy, I would like to focus on expanding health care services.  One of the things that I would continue to do is to work with the administrators at Maui Memorial Medical Center to try to really increase the size of the footprint for the campus and include programs like the Comprehensive Heart and Stroke program, look at trying to have medical offices right there on the campus and provide a Nursing Training program working in conjunction with the Maui Community College. 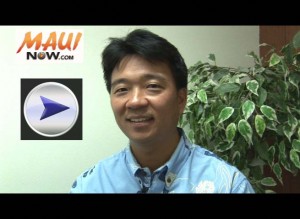 Puunene Prison:  Are you in support of or against building a Prison Facility in Puunene on Maui?  Answer:  The prison facility has taken a number of twists and turns under this administration and I think without a doubt, there is a need to replace the existing facility.  I think that some of the concerns that I have had, as well as other residents, is first of all–when the proposal came out approximately seven years ago, the estimated cost for the facility was about $68 million.  Recently, we have heard that the prison would cost upwards of $235 million.  So, there are several problems with that.  One, I’m not sure if the state has the financial resources to build a facility that costs $235 million; and secondly, when we were looking at the plans and designs of that were proposed by the administration, the facility seems a lot larger than one that is currently needed.  Today we have roughly 355 inmates at the existing facility.  The prison that they were proposing could hold up to 1,600 inmates.  So, I think we will continue to look at the proposals.  I think it’s important to work with the community and make sure that we get the proper programs and services that are also a part of the facility.

Lahainaluna boarding program:What do you think about the Lahainaluna boarding program—should it continue to get state funding, or should it look elsewhere to sustain operations?  If funding is kept—what areas of education should be cut instead.  Answer:  I think one of the good things that happened this year was that with the budget cuts, we were able to really educate a lot of the legislators on the neighbor islands about the Lahainaluna Boarding program and the tradition that was involved there at the school.  I think that many of the legislators, especially the ones from Lahaina, did a tremendous job trying to express the importance of continuing the program.  I think that as we move forward, we realize that the financial situation will continue to be the way it is, probably for another couple of years.  I think that with the help of the private sector, if the Alumni Association can also look for creative ways to help supplement some of the funding for the program, then I think the state will look at it as a great partnership, and hopefully we can continue the program.

Job Growth:  Two industries on Maui most impacted by the economic downturn have been the construction and tourism sectors.  What do you plan to do at the legislative level to get people in those trades back to work.  Answer:  In the last two years, the state senate has taken a very aggressive approach in terms of dealing with the backlog of repair and maintenance projects on state facilities.  One of the things that I had pushed for–being the person in charge of crafting the budget–was that when we’re looking at the current economic situation, we realize that the residential housing market was slowing down when we looked at the private sector, in terms of construction and the number of jobs that were being eliminated.  We wanted to focus on many of the repair and maintenance projects–the backlogs that we had in state government–and we thought that it was a great time to try to move those projects forward.  You had a low-interest rate environment; you had a workforce that was ready and eager to do a lot of those jobs; and you had facilities that were neglected for a number of years.  So we really took an aggressive approach.  I think you’re starting to see some of those jobs finally come on line, and I think if we continue that effort over the next couple of years, then we’ll see a big improvement.  In terms of tourism, I think that one of the key things that we did as neighbor island legislators was stick together and make sure that the transient accommodations tax stayed within the county, so that the county could continue to market tourism throughout the world.

2nd Hospital:  Do you think the establishment of a second critical care facility on Maui would help serve outlying communities, or deplete resources from the current Maui Memorial Medical Center?  Answer:  I think Maui has definitely enough room for additional beds and additional hospitals.  I just think that we need to do it right.  I think that we need to make sure that we have an integrated health care system–one that works hand in hand with the other facilities so that we don’t have many facilities competing for the same types of services.  I think as we move forward, and as our community grows, we all know that the demand will continue to get higher, and therefore, I think we should start planning and looking at additional hospitals on the West side as well as on the South side of Maui.

Civil Unions:  What is your position on civil unions?  Should same sex couples be granted the same rights and privileges as legally married couples?  Answer: The whole civil unions issue to me was strictly a civil rights issue.  I think without a doubt, whether you are a same sex or heterosexual couple, everybody should be afforded the same rights under state law.  When we looked at House Bill 444, in its original draft it really looked a little more like same-sex marriage; however, through vigorous discussions and debates, I think we were able to craft a very good measure, one that will protect the church institutions and their religious beliefs, as well as the civil rights for every single resident in the state of Hawaii.

Closing thoughts:  First of all, I’d just like to thank the residents of Central Maui for the honor and the privilege to serve them for the last eight years.  I truly look forward to their continued support.  I think it’s been a great partnership.  I look forward to taking on the many important challenges that are before us.  Again, like we said, the economy, working on specific facilities for Maui–aside from the hospital–one of the important things that I would like to focus on moving forward, is to build a regional park.  I know we are all familiar with the success of the Waipio Little League program.  I think a large part of that is because of the facilities that they have.  So, I would like to afford Maui residents to have those same types of opportunities, and provide our keiki with a wonderful facility to practice soccer, softball and baseball.

I can be contacted through email at [email protected] or on facebook.